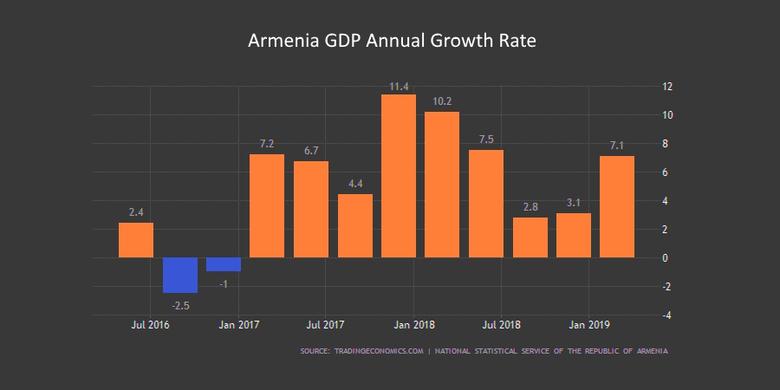 IMF - On May 17, 2019, the Executive Board of the International Monetary Fund (IMF) concluded the Article IV consultation with the Republic of Armenia.

Armenia’s economy continues to perform well. Activity expanded by 5.2 percent in 2018, aided by a pickup in private investment and continued recovery in remittances, and annual consumer price index (CPI) inflation fell to 1.9 percent in March. The current account deficit widened to 9.1 percent of GDP in 2018, primarily owing to stronger capital goods imports, weaker primary income, and some measurement issues. Fiscal consolidation is on track, supported by strong tax administration efforts, with public debt as a share of GDP declining in 2018. Monetary and financial conditions remain stable with limited pressure on the exchange rate. The banking sector is well-capitalized, and credit growth has been supporting economic activity. On the structural front, the fiscal rule was redesigned and improved in December 2017. A full-fledged pension reform came into effect in July 2018. A draft public-private partnership law has been prepared in consultation with international development partners, including the IMF. The new government has pledged to speed up reform, in particular to decisively combat corruption and improve governance, with a view to promoting inclusive and sustainable growth.

Looking ahead, growth is expected to moderate to a more sustainable level of 4.6 percent in 2019 and stabilize at 4.5 percent over the medium term. The authorities are aiming for higher medium-term growth supported by reform. CPI inflation is projected to converge to the Central Bank of Armenia’s (CBA’s) medium-term target of 4 percent over the next two years. The current account deficit is expected to improve to 7.3 percent of GDP in 2019, as transitory factors begin to fade, and gradually fall to a more sustainable level of around 6 percent of GDP, as exports continue to grow and imports moderate somewhat.

Downside risks to growth are mostly external. They include increased global trade tensions and turbulence in global financial markets, both of which could lower trading partners’ growth, remittances, and commodity prices. On the upside, faster progress on the reform agenda could boost potential growth.

Executive Directors agreed with the thrust of the staff appraisal. They commended the authorities’ efforts in recent years to maintain macroeconomic stability and strengthen policy frameworks. Directors noted that Armenia remains vulnerable to external shocks and faces structural challenges in its transition toward a dynamic, private‑sector led emerging market economy. In this context, they welcomed the new government’s reform agenda, particularly anti‑corruption efforts to improve governance and the business environment, to foster sustainable and inclusive growth. Directors emphasized that ownership and resolute implementation are key to the success of the reforms.

Directors supported the authorities’ fiscal consolidation plans, guided by the fiscal rule, aiming to bring central government debt to below 50 percent of GDP in the medium term, while leaving adequate fiscal space for critical spending. They noted that the authorities’ tax reform, including the simplification of the personal income tax system, is aimed at improving compliance and supporting economic activity. However, they cautioned that careful monitoring is needed to avoid a fall in revenues and a worsening of income distribution. Directors also underscored the need for accompanying sustainable compensating measures and strong tax administration efforts. Strengthening revenue mobilization would help preserve debt sustainability while also creating needed space for growth‑enhancing infrastructure and social spending. In this regard, further efforts to improve public investment management were encouraged.

Directors considered that the current monetary policy stance remains appropriate and that policy should remain focused on bringing inflation back to its medium‑term target. At the same time, they underscored the importance of continued exchange rate flexibility in responding to external shocks, maintaining foreign exchange reserves at an adequate level, and protecting competitiveness. Foreign exchange market interventions should be limited to preventing disorderly market fluctuations.

It is expected that the next Article IV consultation with the Republic of Armenia will be held in accordance with the Executive Board decision on consultation cycles for members with Fund arrangements.