INDIA'S GDP UP, DEBT DOWN 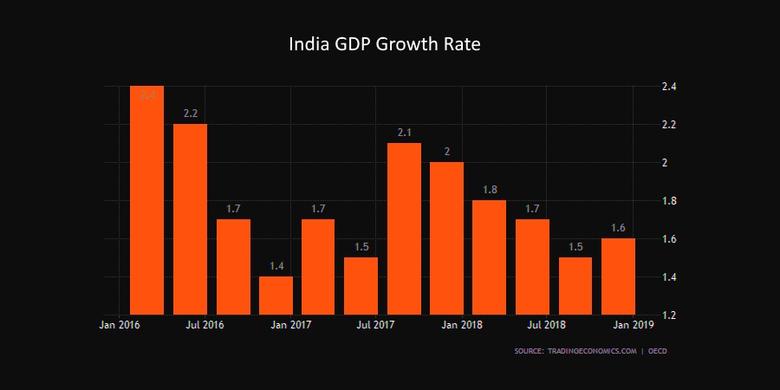 INDIA'S GDP UP, DEBT DOWN

BLOOMBERG - India's benchmark bond yield slid to an 18-month low as a slowing economy and falling oil prices intensified speculation that the central bank will cut rates more than once.

The yield on 10-year rupee sovereign debt fell as much as 9 basis points to 6.94% after data late Friday showed gross domestic product rose 5.8% last quarter from a year earlier. That was slower than the median 6.3% estimate in a Bloomberg survey. Cooling crude prices further improved the outlook for inflation, which is already below the central bank's target.

"A 25-basis point rate cut is discounted and the market is now looking for a change in stance from the RBI," said Paresh Nayar, Mumbai-based head of currency and money markets at FirstRand Ltd. "The market optimism is emanating from slower GDP and the crash in oil prices, which is very good for Indian macros."

Twenty-three of 30 economists surveyed by Bloomberg expect the Reserve Bank of India to lower the benchmark repurchase rate to 5.75% from 6% at its policy decision Thursday. One predicts a 50-basis point reduction.

Monday's advance in Indian bonds marks the continuation of a rally that saw the 10-year yield slump 38 basis points in May, the most since November 2016. The gains have come amid a decline in global yields sparked by an escalating U.S.-China trade war and a thumping election victory for Prime Minister Narendra Modi that's prompted foreign inflows into local debt.

Having broken a key psychological level of 7%, the 10-year yield should now trend toward 6.75%-6.80% if the RBI adopts an easy monetary policy stance, said Nayar.