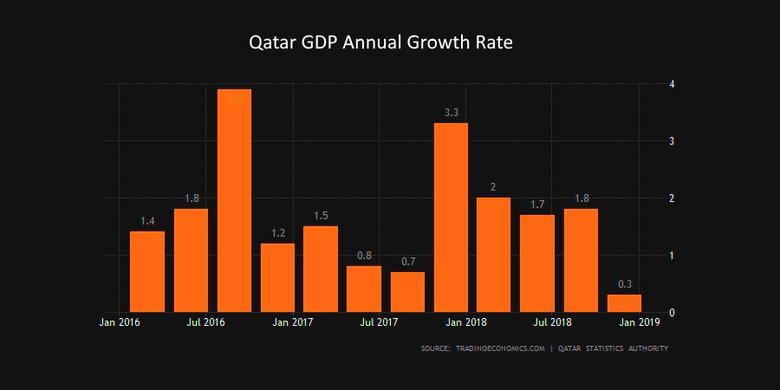 IMF -  the Executive Board of the International Monetary Fund (IMF) concluded the Article IV consultation with Qatar and considered and endorsed the staff appraisal without a meeting.

Economic performance improved in 2018. Qatar’s economy has successfully absorbed the shocks from the 2014–16 drop in hydrocarbon prices and the 2017 diplomatic rift. Real GDP growth is estimated at 2.2 percent, up from 1.6 percent in 2017. Headline inflation remained low. The central government’s fiscal position switched to a surplus of 2.3 percent of GDP in 2018 from a sizable deficit in 2017. Recovery in non-resident deposits and foreign bank funding helped banks increase private sector credit. Banks have been able to diversify the geographical composition of non-resident deposits. The current account is estimated to have reached a surplus of 9.3 percent of GDP in 2018, largely reflecting higher average oil prices. Reserves reached US$31 billion (5½ months of imports) at end-December 2018. Recently, Qatar issued US$12 billion in international bonds, which was more than four times oversubscribed, with lower spreads than in previous issues.

Qatar’s banking sector remains healthy, reflecting high asset quality and strong capitalization. At end-September 2018, banks had high capitalization (CAR of 16 percent) and maintained strong profitability (ROA of 1.6 percent), low non-performing loans (ratio of 1.7 percent), and a reasonable provisioning ratio of 83 percent. Banks are comfortably liquid, with a liquid-asset-to-total-asset ratio of 29.7 percent. Nonetheless, strong credit growth that outpaced deposits resulted in the system-wide loan-to-deposit (LTD) ratio of 103 percent which is higher than the CB’s guidance of 100 percent. After a period of rapid growth, real estate prices in Qatar are adjusting to new levels. According to the real estate price index developed by QCB, following an 82 percent increase during 2012–16, real estate prices fell by 15 percent during 2017–18.

Macro-financial prospects remain favorable, though risks skew to the downside:

Overall GDP growth is projected to reach 2.6 percent in 2019 from 2.2 percent in 2018, underpinned by a recovery in the hydrocarbon output and still robust growth of the non-hydrocarbon sector. The projected non-hydrocarbon growth for 2019 reflects the lingering multiplier effects of sustained increases in capital expenditures in the last few years, the gradual pace of fiscal consolidation, ample liquidity, and increased private sector activity. Medium-term growth will be supported by increased gas production from the Barzan field, a planned increase in LNG production capacity by 40 percent. Inflation is projected to peak at 3.7 percent in 2020 with the introduction of a VAT, but converge to 2 percent in the medium term.

Fiscal consolidation is envisaged to continue, albeit at a slower rate. In 2019, expenditure restraint and lagged revenue impact of higher oil prices would result in further improvement of fiscal position to about 3 percent from 2.3 percent in 2018. Over the medium term, the fiscal position would be in moderate surplus due to broadly stable hydrocarbon prices and sustained expenditure control. A current account surplus of about 4.6 percent of GDP is envisaged for 2019 in line with the projected oil prices, and slower import growth than GDP. Over the medium term, the current account would be in modest surplus.

Lower-than-projected hydrocarbon prices constitute the main risk to the macro-financial framework. They would translate into a deterioration in external and fiscal positions and a higher public debt. Rising trade and geopolitical tensions could undermine investor confidence and weaken fiscal and external positions. Qatar is well placed to contain adverse macro-financial implications of downside risks, reflecting substantial buffers and prudent policies.

Qatar’s economy has successfully adjusted to the dual shocks of lower oil prices and diplomatic rift. Prudent fiscal policy, an appropriate monetary anchor, sound financial regulation and supervision frameworks and considerable buffers continue to underpin strong macroeconomic performance. Increased gas production, a slower pace of fiscal consolidation, infrastructure programs and adequate credit growth will underpin growth over the medium term. The fixed exchange rate regime remains appropriate, as it has provided a clear and credible monetary anchor, although the external position is weaker than implied by fundamentals and desired policy settings. Fiscal consolidation over the medium term would help close the estimated current account gap. Lower‑than-envisaged hydrocarbon prices constitute the main risk to the macro-financial outlook. Nonetheless, Qatar is in a position to weather such a shock, given significant buffers and prudent policies.

Gradual fiscal consolidation would help achieve adequate savings for future generations. Proceeding with a gradual fiscal consolidation is appropriate, given the availability of substantial fiscal space. Enhancing non-hydrocarbon revenues, including the introduction of a VAT should continue to be at the center of reforms for a broad-based tax system. Other fiscal reforms should continue to focus on containing the growth of the wage bill and putting public investment on a downward path. Education and labor market measures are needed to complement public -sector employment reform. An accelerated strategy to further reduce utility subsidies would help generate additional savings and contribute to improved economic efficiency. This strategy would need to be combined with the strengthening of social protection

A robust medium-term fiscal framework would bolster fiscal policy credibility. Strengthening fiscal policy frameworks is vital to averting procyclicality, mitigating risks and ensuring intergenerational equity. The use of fiscal indicators that emphasize intergenerational equity, combined with indicators to better manage oil price volatility remains important. Improving coordination among the fiscal authorities, QCB and QIA could strengthen fiscal-macroeconomic management. These measures could be complemented with a medium-term budget framework. Accelerating efforts towards turning the medium-term budget framework into a performance based medium-term expenditure framework would be useful. Publication of comprehensive information on the budget, including fiscal risks, budget execution data, and the composition of QIA’s assets, would support improved transparency.

Banks remain sound, underpinned by strong profitability and capital as well as high asset quality. It is important to continue to monitor closely banking sector’s assets, given the softening of real estate prices. In this connection, QCB should consider introducing additional indicators such as vacancy rates to assess in a more timely fashion developments in the real estate sector. The emphasis on risk-based supervision is important, as it provides the opportunity to detect vulnerabilities at earlier stages. The loan-to-deposit ratio should be enforced to encourage banks to reduce leverage. Strengthening the modalities for the exchange of information between the fiscal and monetary authorities would help avert sharp swings in liquidity and the related adverse economic and financial impact. Financial innovation tends to give rise to risks and vulnerabilities, despite the advantage of enhancing financial inclusion. It is therefore important to further strengthen financial supervision and the regulatory framework to ensure that consumers are protected and offered sound products.

Structural reforms with emphasis on private sector-led growth and economic diversification would help support a more inclusive growth. Authorities’ reform agenda pertaining to the business environment, special economic zones, labor law, increased foreign ownership limits and privatization is welcome. While SEZs can be helpful in the short term, they should not constitute an alternative to economy-wide structural reforms. Domestic and export-market competition should be used as benchmarks to hold beneficiaries of government’s support accountable. Policy measures that focus on further improving the business environment, including improved contract enforcement and enhanced strengthened competition through reform of the insolvency mechanism, would buoy private sector-led growth. Laws that focus on ensuring equal remuneration and support gender equality would support inclusive growth.