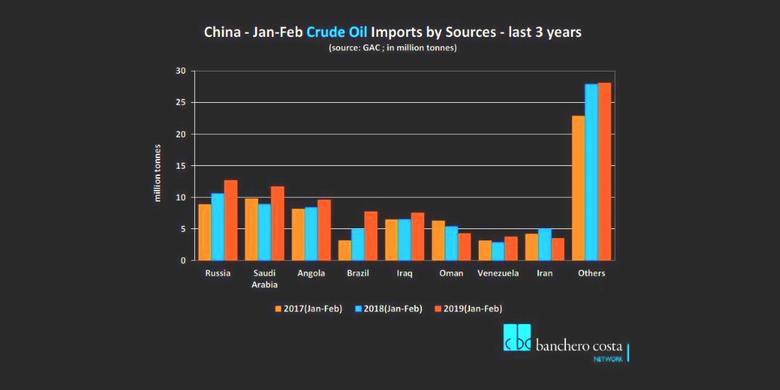 REUTERS - Russia became the largest crude oil supplier to China in May, supported by robust demand from private refiners and alongside a fall in supplies from Iran.

Imports from Russia came in at 6.36 million tonnes in May, or 1.50 million barrels per day (bpd), data from the General Administration of Customs showed on Tuesday.

On a barrels per day basis, imports were up 4% from a year ago, but were flat versus April when China's total crude oil imports hit a monthly record.

For the first five months of the year, shipments from Russia were 30.54 million tonnes or 1.48 million bpd, up 9.8% percent from a year ago, customs data showed.

Chinese oil majors Sinopec and CNPC skipped Iran oil purchases for May after the expiry of a waiver on U.S. sanctions.

Arrivals from Saudi Arabia fell 25% last month from a year ago to 1.108 million bpd. That compared with 1.53 million bpd in April.

For the first five months, China's crude imports from the United States fell 80% from a year ago to 1.35 million tonnes or 65,264 bpd. Buying has dwindled amid an escalation of trade tensions, even though the Chinese government has not raised tariffs on U.S. oil despite raising duties on U.S. LNG and coal.