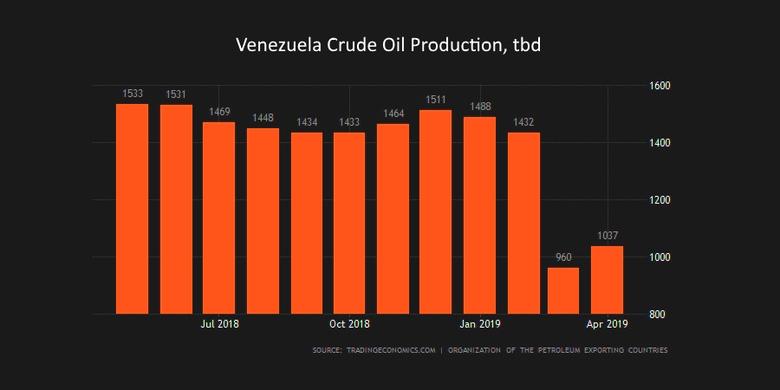 REUTERS - Venezuelan PDVSA's oil exports took another hit in May, following a deadline for customers to wind-down purchases in order to comply with U.S. sanctions, according to documents from the state-run company and Refinitiv Eikon data.

The energy firm's exports of crude and refined products fell 17% in May from the previous month to 874,500 barrels per day (bpd), mainly due to difficulty in selling off barrels of upgraded crude that used to be bought by U.S. refiners.

Venezuela has drained oil inventories since late January, when Washington imposed sanctions on PDVSA, to offset declining crude output, according to analysts. That allowed the firm to maintain exports around 1 million bpd for the following three months despite the measures.

But some customers ended purchases of Venezuelan oil in late April to comply with sanctions, leaving PDVSA with an accumulation of upgraded oil and further reducing its portfolio of regular buyers, according to the reports and data.

In May, PDVSA shipped a total of 33 cargoes of crude and fuel, mainly to Asian destinations. Exports to India fell over a third to 187,000 bpd while shipments to China remained around 450,000 bpd. Russia's Rosneft, which takes PDVSA's barrels as repayment of billions of dollars in loans to Venezuela, was the largest recipient of the OPEC member's oil.

Europe took 8% of the total, almost the same as in April, as Spain's Repsol resumed a swap allowing it to take crude from PDVSA as a late dividend payment while sending fuel in exchange to Venezuela, according to the data.

Venezuela oil exports to Cuba grew in May to 91,000 bpd from 49,000 bpd the previous month, even though the government of U.S. President Donald Trump has hardened sanctions to PDVSA's flow to the island at request of the congress head, Juan Guaido.

The opposition leader invoked the constitution to assume the role of interim president in January after an election many called a sham that has kept Socialist President Nicolas Maduro in power.

Guaido was recognized by most Western countries as the legitimate president, but has struggled to enforce his government's mandate amid a humanitarian crisis in the country. In March, the opposition-led congress prohibited Venezuelan oil exports to Cuba, but PDVSA, still controlled by Maduro, has continued transporting oil to the island in owned and rented vessels that often switch off their transponders to avoid detection.

Venezuela's dwindling oil exports are the main reason why U.S. refiners have recently struggled to find heavy crude, inflating prices of grades such as Mexico's Maya even above the U.S. crude futures benchmark.

LESS FUEL AS IMPORTS PLUNGE OVER 30%

Venezuela's imports of fuel and diluents fell to 137,500 bpd in May, well below the more-than 200,000 bpd received in March and April, which brought lines of drivers to filling stations across the country waiting to refuel their vehicles.

The U.S. government in March told some oil firms and traders to stop shipments of gasoline to Venezuela. In May, it also asked them to halt exports of jet fuel to the OPEC-member nation.

So far this year, Venezuela has imported about 190,000 bpd of refined products, including heavy naphtha for diluting extra-heavy oil, as well as gasoline, diesel and liquefied petroleum gas, according to the documents and data. Most fuel cargoes have been provided by Rosneft, India's Reliance Industries, Repsol and China National Petroleum Corp's unit PetroChina. 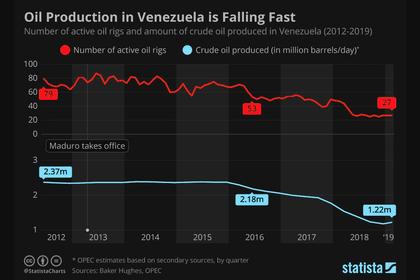 VENEZUELA'S OIL TO CUBA UP
Venezuela's state-owned PDVSA exported 1.416 million barrels of combined crude and products in May to Cuba's state Cubametales, up from 355,000 barrels in April.
English 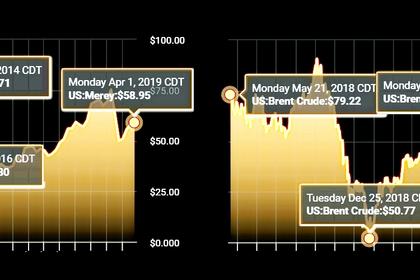 VENEZUELA'S OIL DISCOUNT
Crudes are being priced at Dated Brent discounts between $15/b and $17/b, FOB, according to a PDVSA report.
English
All Publications »
Tags: VENEZUELA, OIL, SANCTIONS
OIL PRICE: BRENT NEAR $117, WTI ABOVE $111