REUTERS - Oil prices slipped on Tuesday as concerns that the global economy could be slowing outweighed an agreement by OPEC and allies, including Russia, to extend supply cuts until next March.

The Organization of the Petroleum Exporting Countries along with other top producers, including Russia, agreed on Tuesday to extend oil supply cuts until March 2020 as members overcame differences to try to prop up prices.

But signs of a global economic slowdown which may hit oil demand growth, means OPEC and its allies may face an uphill battle to shore up prices by reining in supply.

The United States and China agreed at the G20 leaders summit to restart trade talks, but factory activity shrank across much of Europe and Asia in June while growth in manufacturing cooled in the United States.

Asian shares wobbled on Tuesday, U.S. Treasury yields fell and gold rebounded, while a tweet by U.S. President Donald Trump saying any trade deal with China would need to be "somewhat tilted" in favor of Washington also stoked doubt over prospects for a trade deal between the top two economies. 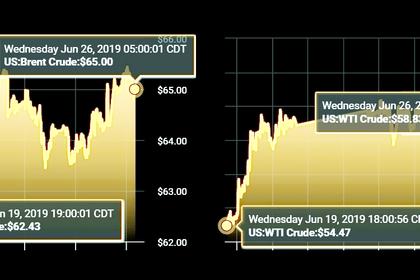 U.S. FINANCIAL RISKS UP
In addition, a number of medium-term risks are growing. The financial system appears healthy but vulnerabilities in leveraged corporates and, potentially, in the nonbank system are elevated by historical standards. An abrupt reversal of the recent supportive financial market conditions or a deepening of ongoing trade disputes represent material risks to the U.S. economy, with concomitant negative outward spillovers. The U.S. public debt-to-GDP ratio is on an unsustainable path and is expected to continue rising throughout the medium-term, as aging related spending rises.
English
All Publications »
Tags: OIL, PRICE, BRENT, WTI
OIL PRICE: BRENT NEAR $82, WTI ABOVE $75