RUSSIA'S OIL FOR CHINA UP AGAIN 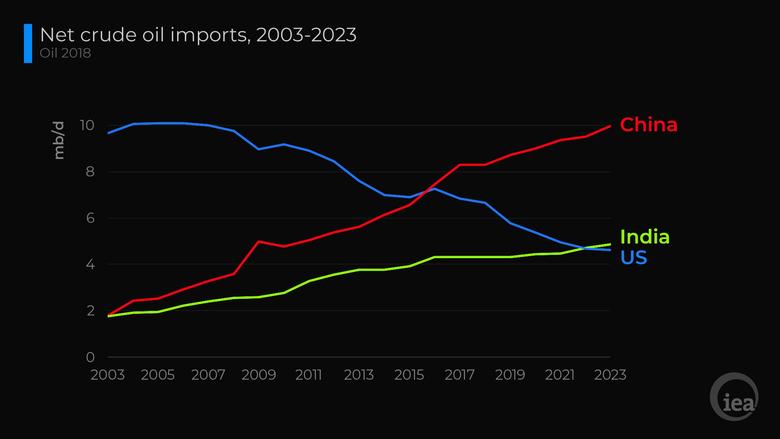 RUSSIA'S OIL FOR CHINA UP AGAIN

June imports from Russia were up 31.7% on month from 1.76 million mt in May, hitting a five-month high, and also 124% higher from a year earlier.

About 96% of the Russian imports were ESPO blend, with only 100,000 mt of Sokol imported by Shengxing Petrochemical.

The comparatively strong demand of gasoil has been supporting the higher appetite for ESPO grade, according to sources.

The ESPO imports were shared by nine refineries last month, along with two trading companies.

Meanwhile, imports from Angola rose 55.2% on month to 1.55 million mt in June, surpassing Brazil as the second-largest supplier.

Brazilian imports in June increased only marginally by 1.4% on month to 1.33 million mt from May, mainly due to fewer Lula cargoes shipped to Asia.

Imports of crudes from Saudi Arabia were around 1.1 million mt, up 1.4% on month. All of them were taken by Hengli Petrochemical.

June imports from Malaysia dropped 31.6% on month to around 898,000 mt, the only source that recorded a fall among the top five suppliers.

The combined imports from the top five suppliers amounted to 7.19 million mt, or 67.9% of the total imports, in June.

Platts' survey covers barrels imported by 38 refineries with quotas, and others without quotas, through ports mostly in Shandong province, as well as Tianjin, Zhoushan and Dalian for the sector.

These refiners were awarded a combined quota of 123.33 million mt until early-July, accounting for 84% of the county's total allocation for independent refineries, including two batches and supplemental volumes.

The barrels included those imported directly by refiners and trading companies that will be used by the independent sector.

Only cargoes discharged over the month -- including those that arrived in previous months -- were counted as imports for the month.

All those imports were for independent refineries in Shandong province, due mainly to the relatively higher yields of gasoil, according to refinery sources.

Lula was the second top crude at only 860,000 mt in June, up 19.9% on month. Those were imported by five independent refineries, including Petrobras that got about 130,000 mt of the imports.

Nemina crude were favored mostly by ChemChina, but Luqing Petrochemical also started to use Nemina in recent months.

Petrobras has put its first crude cargo into the bonded storage facilities in Dongjiakou port late-June, marking a new initiative for the oil company to sell spot cargoes directly to independent refineries in Shandong.

The VLCC Maran Cleo had arrived in Qingdao port at around June 24, with half of the Lula cargo for Petrobras, and the rest for Chambroad Petrochemical.

In addition, Petrobras will have a second cargo, the VLCC Cosjade Lake, due to arrive at around July 11. Half of that cargo, about 130,000 mt of Buzios crude, will be put into storage.

The cargo was offered at around $4/b against the September ICE Brent futures this week, on a DDU Shandong basis, but buyers haven't shown up yet, according to sources.

Imports via Qingdao port, including Dongjiakou port, edged down 5.7% on month to 4.44 million mt in June. The imports made up 42% of the total -- falling from around 43% in the previous month.

The Qingdao port imports, though remaining the biggest in terms of crude arrivals, have been falling as imports via Dalian by Hengli Petrochemical has increased drastically in recent months.

Those drops at Qingdao and Yantai were partly offset by the incremental imports via Rizhao port at 1.78 million mt, up 89.7% on month, mostly by Dongming Petrochemical. 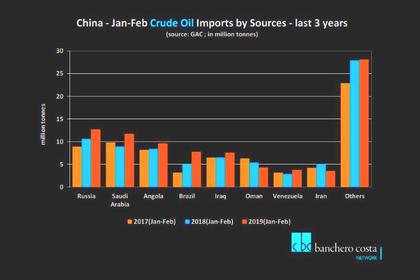 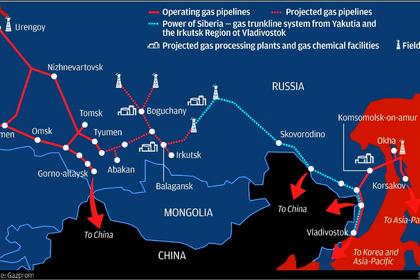