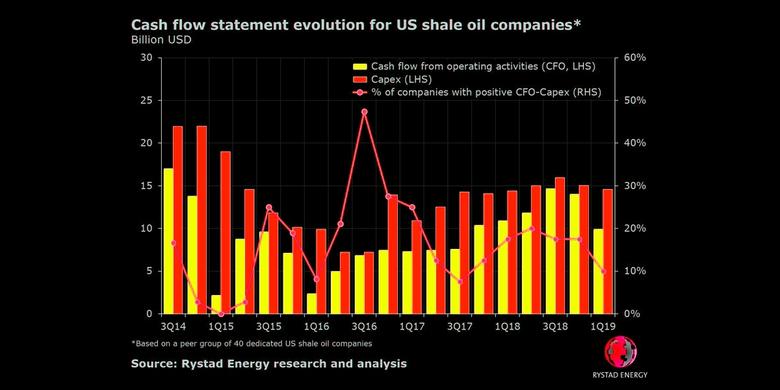 MEOG - US oil production is growing, with Rystad Energy estimating that the nation produced an average of 12.5mn barrels per day (bpd) in May 2019—an all-time high.

By December 2019, Rystad Energy forecasts that the US will produce a staggering 13.4mbpd, which would shatter its own record.

"Our US supply projections have been revised up yet again. US oil production is already higher than many in the market believe," said Bjørnar Tonhaugen, head of Oil Market Research at Rystad Energy. 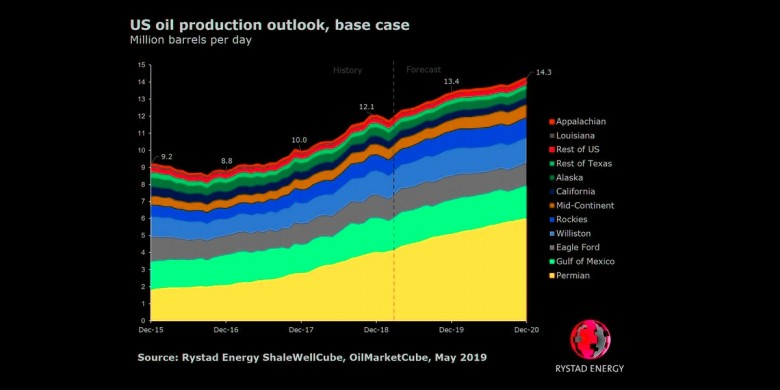 "That is the lowest CFO we have seen since the fourth quarter of 2017," says Alisa Lukash, senior analyst on Rystad Energy's North American Shale team. "The gap between capex and CFO has reached a staggering $4.7bn. This implies tremendous overspend, the likes of which have not been seen since the third quarter of 2017."

With negative cash flows, shale companies have historically relied on bond markets to finance their operations. Without additional funding and any debt refinancing, capex would have to be cut.

However, no US shale company has made a public offering since the sharp fall in oil prices – and subsequent share price slide – late last year, marking the longest gap in public capital issuance since 2014.

March and April 2019 saw a few of the more indebted operators issue bonds, intended to partly cover outstanding obligations for the coming year. However, pricing for this type of issuance has risen substantially due to the increased Fed Rate and the overall increased risk associated with US oil companies from a market perspective.

Many operators are building production momentum now after a seasonal dip during the winter months. As oil prices improve Rystad Energy expects the second quarter will see a significant increase in CFO while capex remains stable.

The majority of US shale oil producers have slightly reduced their long-term debt by paying down obligations which will soon reach maturity. This supports the deleveraging goals of many E&Ps.

"When considering available cash for a potential stockholder payback, the majority of US shale oil operators saw free cash flow to equity below zero in the first quarter," Lukash remarked.

In the second half of 2019 Rystad Energy expects drilling activity to stay robust, potentially increasing transaction volumes rather than inducing an inflow of capital into the industry.

"Larger diversified operators, which have multiple cash generating engines and are more resistant to volatile commodity prices, will be especially poised to open up to acquisition of new acreage," Lukash added.