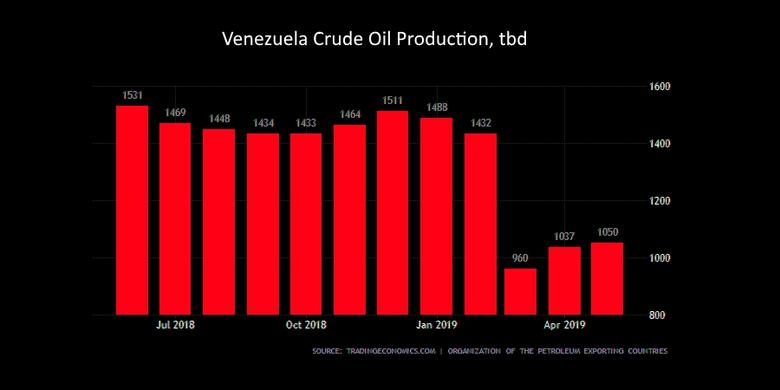 REUTERS - Venezuela's oil exports recovered in June from a sharp drop the month before, helped by increased deliveries to China, which is now state-run oil firm PDVSA's primary destination for its crude, according to company records and Refinitiv Eikon data.

PDVSA and its joint ventures exported 1.1 million barrels per day (bpd) of crude and refined products last month, a 26% increase over May. Chinese buyers took 59% of the shipments, followed by India with 18% and Singapore with 10%, the documents showed.

June data show the OPEC member nation has been able to restore the level of exports it maintained earlier this year, after the U.S. imposed sanctions on PDSVA in January designed to starve the nation of oil revenue. PDVSA has since reorganized its businesses to continue crude exports, which are the country's main source of revenue.

PDVSA did not reply to a request for comment.

The United States this year barred U.S. companies from dealings with PDVSA and recognized Venezuelan congress chief Juan Guaido as the country's legitimate leader on the grounds that President Nicolas Maduro's 2018 re-election was a sham.

Venezuelan oil exports to China have risen consistently since the sanctions hit, the data showed. In February, the volume shipped was 233,000 bpd, and in June it almost tripled to 656,000 bpd. However, PDVSA's exports to India, another large receiver, have declined to 200,000 bpd, while deliveries to Europe have remained around 85,000 bpd in recent months.

Under oil-for-loan agreements with China and Russia that have supplied billions of dollars to Venezuela in the last decade, PDVSA must deliver the largest portion of its oil exports to China National Petroleum Corp [CNPC.UL] and Russia's Rosneft to repay the credits. Another share of the exports is exchanged for fuel purchases.

PDVSA imported 117,100 bpd of fuel in June, the third consecutive monthly drop. Rosneft and Spain's Repsol were the main suppliers of products, including gasoline, diluting naphtha, diesel and liquefied petroleum gas, according to the data.

Last month, PDVSA began tests to reshuffle crude production to favor exports of grades favored by Asian refiners. U.S. refiners that once were among Venezuela's largest receivers took no crude last month. Exports to Cuba last month declined after a May jump, the documents showed.