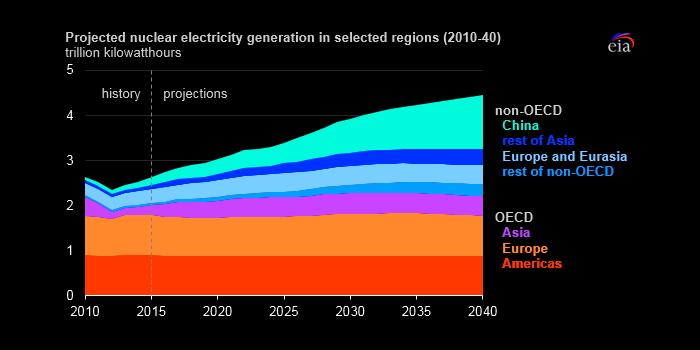 The European Union puts it bluntly: We must reduce the level of CO2 emissions and we need to start doing it right now. While some EU Member States are more advanced in achieving their climate and energy goals, others are lagging behind, writes Yves Desbazeille, director general of Foratom.

Their tardiness is often not the result of ill will, but rather caused by the broad scope of challenges which have to be addressed en route to achieving carbon neutrality. The required deep decarbonisation of the energy system, if not done properly, can trigger significant social impacts, for example causing job losses or affecting countries' economies. That's why the EU has to choose the right tools to carry out this process. To this end, nuclear energy is capable of providing both clean electricity and various economic benefits.

To exemplify the potential benefits of nuclear energy, let's take a look at Poland - a coal-dependent country which is currently developing a strategy to decarbonise its power sector. Nuclear energy is supposed to become a linchpin of the country's low-carbon future. One of the main reasons is its positive impact on the economy and employment. As the Polish Minister of Energy rightly noted, "Nuclear power provides an opportunity to implement technologically advanced projects that can contribute to the creation of stable, high-value jobs at the level of the entire economy." It is clear that nuclear offers a win-win opportunity as some of those currently employed in the coal industry could be retrained and work in the nuclear field.

This is just one particular example, so what does the impact of nuclear energy on the economy look like at the EU level?

Where are we now?

In April, Deloitte published a socio-economic impact evaluation of the nuclear industry on the European Union, in which it assessed the contribution of the nuclear sector to the overall economy of the EU28. The study presents in detail the benefits of nuclear energy and focuses on employment, GDP, state revenues and disposable household income. It takes into account nuclear energy's direct and indirect impacts.

According to the study, the nuclear industry has a significant impact on the European economy as it sustains 1.1 million jobs (47% of which are highly skilled), generates EUR507 billion (USD556 billion) in EU GDP, EUR124 billion in state revenues, EUR383 billion in household income and a EUR18.1 billion trade surplus in the EU economy. These figures are significantly higher than is the case of - for example - the wind and solar industries. The wind industry (with an installed capacity of 160 GW) supports just over 250,000 jobs in Europe and generates EUR36.1 billion in GDP, while the solar power sector supports just over 80,000 jobs (with an installed capacity of 100 GW). 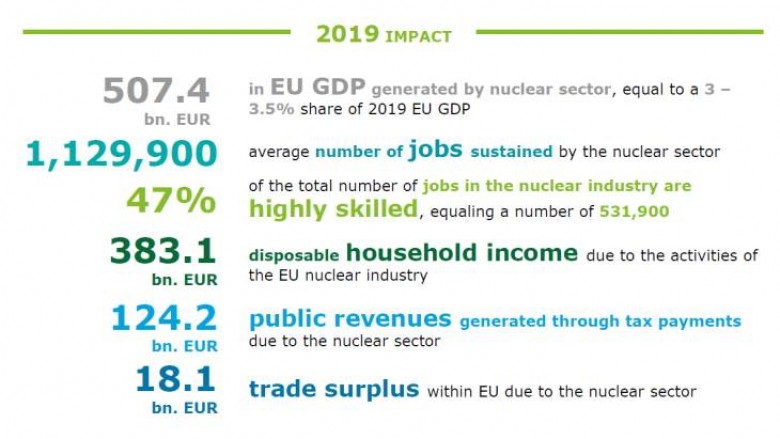 In order to better illustrate the positive impact of nuclear energy on the European economy, it's worth highlighting that every euro spent generates an additional EUR5 in EU GDP, and every direct job created in the nuclear industry creates 3.2 jobs in the EU economy as a whole.

The results also show that every gigawatt of nuclear capacity generates EUR9 billion in annual investment, a EUR4.3 billion impact on EU GDP, EUR3.25 billion in household income for EU citizens, EUR1 billion in public revenues and an EU trade surplus of EUR0.15 billion. On top of that, it sustains over 9500 direct and indirect jobs. 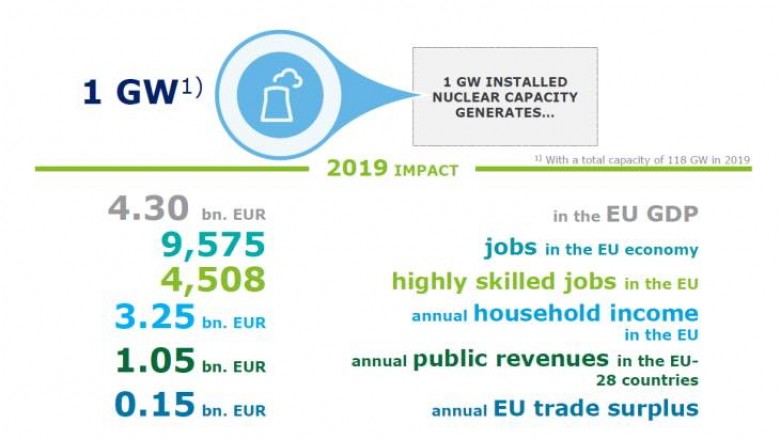 What will the future bring?

As the European Union is currently working on its future carbon-free energy mix (by 2050), in which nuclear energy is expected to play a significant role according to the European Commission, it's also important to assess nuclear energy's potential contribution to the European economy in the years to come. In order to do so, the authors of the Deloitte study have drawn on the 2018 FTI-CL Energy Consulting report and its high-level scenario assuming a total nuclear capacity of 150 GW in 2050. This means that, like today, nuclear would account for about one-quarter of the electricity mix. 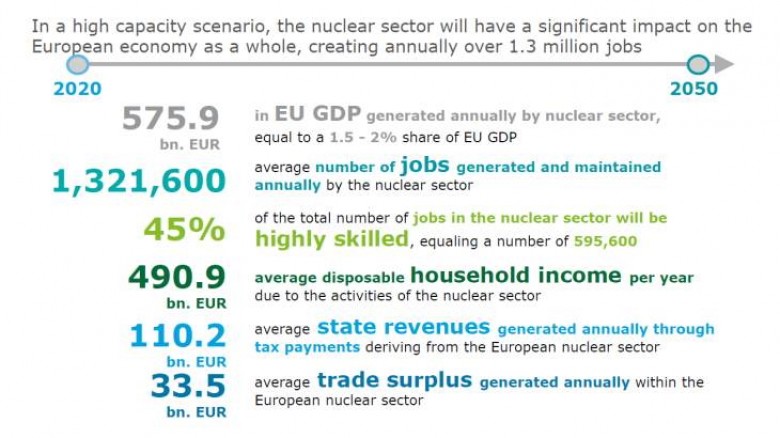 Why does it matter?

All these figures are important while agreeing on which route the European Union should choose to achieve carbon neutrality. While selecting the most suitable direction, EU decision makers should ensure that they take the economic contribution of each energy source into account. For example, if we compare nuclear energy with wind and hydro power, each technology's impact on the European economy varies significantly. One gigawatt of installed capacity in 2030 would generate in terms of its contribution to EU GDP: nuclear - EUR2.9 billion and 6000 jobs, wind - EUR0.3 billion and 1800 jobs, hydro - EUR0.2 billion and 400 jobs. 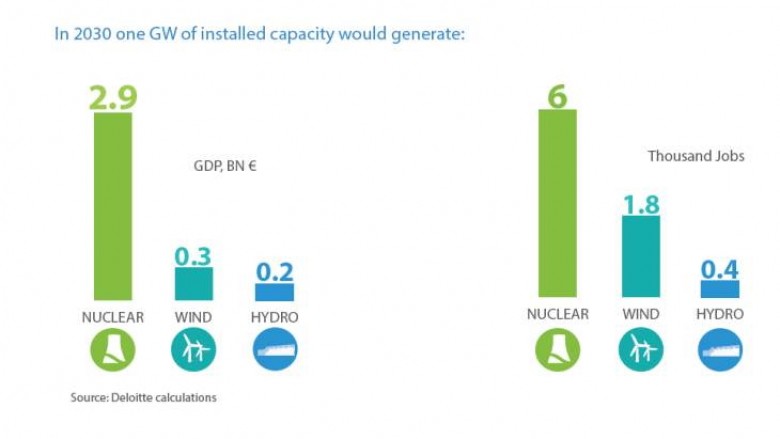 These numbers show clearly that from among the low-carbon technologies that are available in Europe, nuclear is the most beneficial for the European economy.

The presented figures show that choosing nuclear energy as an important element of a future energy mix can help the European Union on many levels. With all the benefits it brings, compared with other low-carbon energy sources, the role nuclear energy should play in the years to come needs to be recognised. Not only will this allow the EU to achieve its carbon-free targets, whilst at the same time ensuring it has access to the energy it needs when it needs it, but it will also provide a significant contribution in terms of economic growth and job creation.

A high nuclear power capacity of 150 GW would entail widespread economic benefits throughout the EU, sustaining more than 1.3 million jobs and hundreds of billions of euros in additional GDP growth, tax revenues and household income. This would benefit all EU Member States, including those without nuclear power plants, and help the EU become more prosperous. 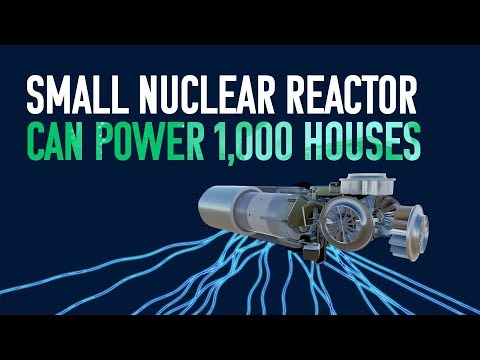 THE NEW U.S. NUCLEAR POWER
DOE is currently working with the Department of Defense to demonstrate and deploy microreactors as early as 2023. These smaller, transportable, factory-built systems can boost resiliency and reliability of energy at remote military locations.
English 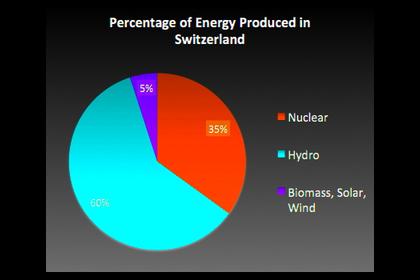 SWITZERLAND WILL CUT EMISSIONS TO ZERO
The Swiss government has announced it will cut its greenhouse gas emissions to a net-zero level by 2050. According to Swiss government statistics, about 60% of Switzerland's electricity generation comes from renewable sources, most of it from hydro (56.6%). Nuclear contributes about 37.6% and about 2.5% comes from fossil fuels.
English 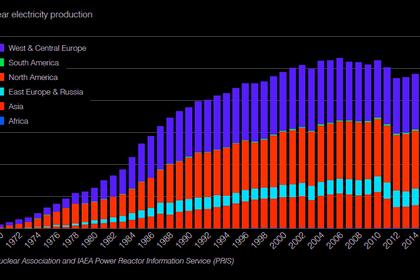 STRONG NUCLEAR GROWTH
The world’s nuclear plants continue to perform excellently. Growth is strong, with more than 20 new reactors scheduled to be connected before the end of 2020. For the industry to reach the Harmony goal of supplying at least 25% of the world’s electricity before 2050, much greater commitment from policymakers will be required.
English
All Publications »
Tags: NUCLEAR, POWER, ENERGY
OIL PRICE: BRENT BELOW $88, WTI ABOVE $81