SWITZERLAND WILL CUT EMISSIONS TO ZERO 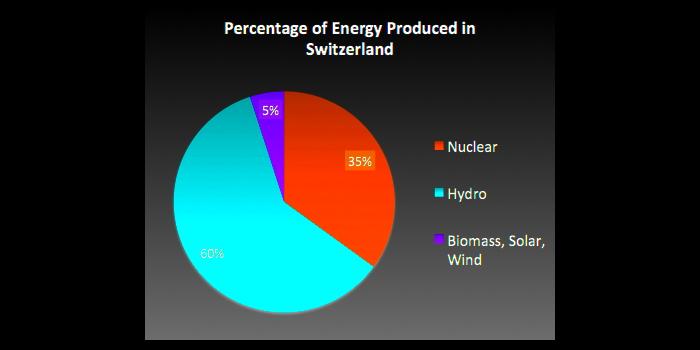 SWITZERLAND WILL CUT EMISSIONS TO ZERO

WNN - The Swiss government has announced it will cut its greenhouse gas emissions to a net-zero level by 2050. According to Swiss government statistics, about 60% of Switzerland's electricity generation comes from renewable sources, most of it from hydro (56.6%). Nuclear contributes about 37.6% and about 2.5% comes from fossil fuels.

Under the Paris Agreement on Climate Change, Switzerland had undertaken to halve its greenhouse gas emissions by 2030 compared with 1990 levels. Now, based on new scientific findings published by the Intergovernmental Panel on Climate Change (IPCC), the Federal Council decided at its meeting on 28 August to set the even more ambitious target. In doing so, it says it is meeting the internationally agreed target of limiting global warming to a maximum of 1.5 degrees Celsius when compared with the pre-industrial era.

"By signing the Paris Agreement, the Federal Council signalled its long-term aim of reducing Switzerland's carbon emissions by 70-85% by 2050," according to a government statement. "This target was based on the findings of the IPCC that global warming would have to be reduced by 2100 to less than 2 degrees in order to avoid serious consequences for humankind and biodiversity."

The statement added: "In 2018, the IPCC reported that global warming of 1.5 degrees could also lead to serious changes in ecosystems and that a net emission balance of zero would have to be achieved considerably sooner. In response, the Federal Council instructed the Federal Office for the Environment (FOEN) to review the long-term climate targets and to devise potential courses of action. In addition, on 26 June the Federal Council in its discussion of Switzerland's priorities for the UN General Assembly in 2019 decided that Switzerland would increase its target for the emission reductions to be achieved by 2050."

"All the countries that signed the Paris Agreement are required to submit long-term climate strategies to the UN Climate Change Secretariat by the end of 2020. In Switzerland, CO2 emissions from transport, buildings and industry can be reduced by up to 95% by 2050 through technologies that are already available and by using renewable energy sources. There is also potential for reducing greenhouse gases, particularly the methane and nitrous oxide produced by agriculture. In addition, the reduction of emissions produced in other countries will form part of the strategy.

"Alongside natural CO2 sinks (such as forests and soil), technologies that permanently remove greenhouse gases from the atmosphere and store them are to be used in future to offset the remaining emissions. Swiss industry and research is playing an important role in the development of these emission technologies," it added.

The FOEN is working with other federal offices to draw up the 2050 climate strategy, which the Federal Council plans to finalise by December 2020. The Swiss Federal Office of Energy's Energy Perspectives 2050 report forms an important basis for the work.

Switzerland voted in a referendum in May 2017 to approve a revision to the country's energy policy that promotes the use of renewable energy sources and energy conservation. The revised Federal Energy Act also prohibits the construction of new nuclear power plants.

A new Swiss energy policy was sought in response to the March 2011 accident at the Fukushima Daiichi plant in Japan. Two months later, both the Swiss parliament and government decided to exit nuclear power production. The Energy Strategy 2050 initiative drawn up by the Federal Council calls for a gradual withdrawal from nuclear energy. It also foresees expanded use of renewables and hydro power but anticipates increased reliance on fossil fuels and electricity imports as an interim measure.

In May this year, the IEA published its first report addressing nuclear power in nearly two decades - Nuclear Power in a Clean Energy System - in which it says that, alongside renewables, energy efficiency and other innovative technologies, nuclear can make a significant contribution to achieving sustainable energy goals and enhancing energy security. It also said that nuclear power had helped to slow the long-term increase in emissions of CO2 over the last half-century, particularly in advanced economies.