REUTERS - OCTOBER 16, 2020 -  Financial markets remained shaky on Friday as hopes for a new round of U.S. fiscal stimulus met fears that social restrictions to tackle the coronavirus pandemic would undermine economic recovery.

Oil prices and Asian stocks slid, but European stocks recovered in morning trading after sharp losses the day before.

“It’s a tug-of-war between risks that are well flagged, the pandemic, the U.S. election, Brexit, and at the same time hope that these same risks can be resolved in matter of weeks or months”, said Emmanuel Cau, head of European equity strategy at Barclays.

“In the meantime, it’s hard for investors to take positions on the short term given all the uncertainties,” he said. “Looking forward to 2021, there’s a good probability these risks will be behind us.”

The pan-European STOXX 600 .STOXX rose 0.8% about an hour after the open. They had lost over 2% on Thursday as new social restrictions in Europe, including a curfew in major French cities and tighter restrictions in London, spooked investors.

The euro also regained some ground, rising about 0.1% to $1.1717 as investors shifted from perceived safe havens such as the dollar and the yen to riskier currencies.

Germany’s 10-year bond yield was set for its biggest weekly drop since August as doubts grew about the economic recovery in the euro zone.

Uncertainty regarding the trade negotiations between the European Union and the UK remained high, as British Prime Minister Boris Johnson was expected to respond to the EU’s demand for more concessions.

Oil prices continued to slide, dragged down by concerns that resurgent COVID-19 cases in Europe and the United States would curtail demand.

Spot gold prices were flat at $1,909.05 but looked set for their first weekly drop in three.

Futures for Wall Street’s S&P 500 were flat after ending lower on Thursday following a rise in weekly jobless claims.

U.S. President Donald Trump’s offer on Thursday to increase the size of a fiscal stimulus package to win the support of Republicans and Democrats helped narrow Wall Street’s losses, though many investors still believe a deal is unlikely before the Nov. 3 election. 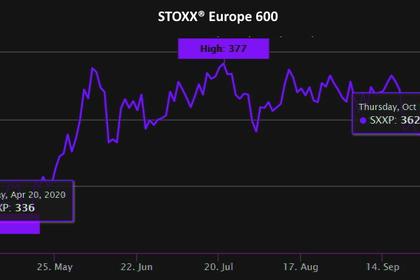 EUROPE'S SHARES DOWN
The pan-European STOXX 600 index .STOXX was down 1.7%
English 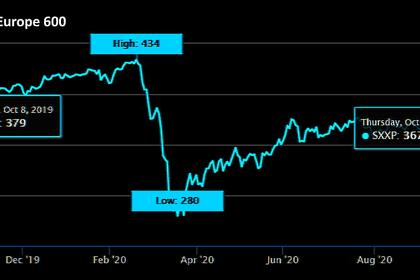 EUROPE'S INDEX DOWN
The pan-European STOXX 600 was down 0.5% after recording its biggest single-day gain in three months on Monday.
English

EUROPE'S CLIMATE TARGETS
These goals are appropriately ambitious, while also realistic and achievable. Climate change mitigation is not a luxury but a necessity if we want to avoid a climate crisis.
English
All Publications »
Tags: EUROPE, SHARES, STOCKS, INDEXES, BONDS
OIL PRICE: NEAR $41 ANEW