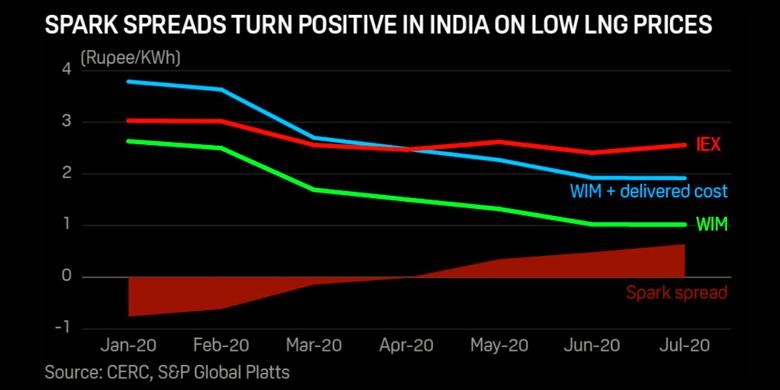 PLATTS - 06 Oct 2020 - India's gas-based power generation this year has climbed to a level not seen in years as record low gas prices helped to make it relatively more attractive than coal in certain regions of the country, with analysts expecting the trend to continue for the rest of the year.

The substantial change in the near-term demand pattern may give some relief to gas importers that have otherwise witnessed a drop in consumption from other sectors as COVID-19 prompted countrywide shutdowns for months.

"We believe gas will continue to do well in India's power mix and assume a year-on-year increase for most months in the second half of the year," said Andre Lambine, senior analyst at S&P Global Platts Analytics.

A warmer-than-usual winter, additional supply from Australia and the US, along with COVID-19 inflicted demand destruction pulled down the average of January-October delivered WIM price to $3.17/MMBtu from $5.62/MMBtu in 2019.

The spark spread is the difference between the wholesale price of electricity and the cost of production using natural gas. For power plants in Gujarat, western India, the spark spread was positive in May, June and July at Rupees 0.35/KWh, Rupees 0.48/KWh and Rupees 0.64/KWh, respectively, taking into account WIM for spot LNG delivered prices and the monthly average of day-ahead prices on the Indian Energy Exchange, Platts calculations showed.

Generation from gas-fired units has done relatively well in India. It increased 0.9 GW, or 6 million cu m/d, year on year to 6.5 GW in July, or 38 million cu m/d, with most of the increase coming from the western region where a new LNG terminal opened earlier this year. While gas burn is down from its 7 GW peak in June, Platts Analytics expects gas in power to continue doing well during the rest of 2020.

"We estimate that in Asia, only India and Taiwan have used more gas in power so far this year compared to the same period in 2019," Lambine said.

Grid operators actively use gas and hydropower to help manage large intraday changes in power demand, and this is likely a key driver for the continued strength in gas-fired power generation, sources and analysts said.

As gas continued to have a slight edge over coal this year, steam coal imports by Indian power utilities fell about 37% year on year at 18.12 million mt in April-August 2020, data from India's Central Electricity Authority, or CEA, showed.

Of the total, utilities imported 4.67 million mt for blending with domestic coal while 13.45 million mt was imported by those that use only imported coal for their power plants, the data showed. Power plants consumed 226.95 million mt coal during April-August, down 17% on the year.

"Gas demand managed to recover a bit faster than expected earlier this year because of the coal-to-gas switching that we saw in some areas," a senior official at an Indian gas company said. "If a low gas price environment continues, gas demand from some power plants should be fairly strong."

Over a longer period, skeptics of India's gas demand in the power sector are pointing to higher spot LNG prices making gas-based power generation uneconomical. But there are others who are hopeful of gas-fired power generation due to policy measures announced by the government.

Spot LNG prices have recovered from record lows earlier this year, with the WIM assessed at $5.10/MMBtu on Oct. 5.

Thermal coal currently accounts for about 56% of the share in power generation while gas and oil account for 7% and 0.2%, respectively. Renewables, including hydropower and other sources, account for 34.7%, and nuclear the remaining 1.9%, according to CEA data.

Analysts say India's campaign to boost the share of gas in its energy mix to 15% by 2030 from nearly 6% currently is an ambitious target.