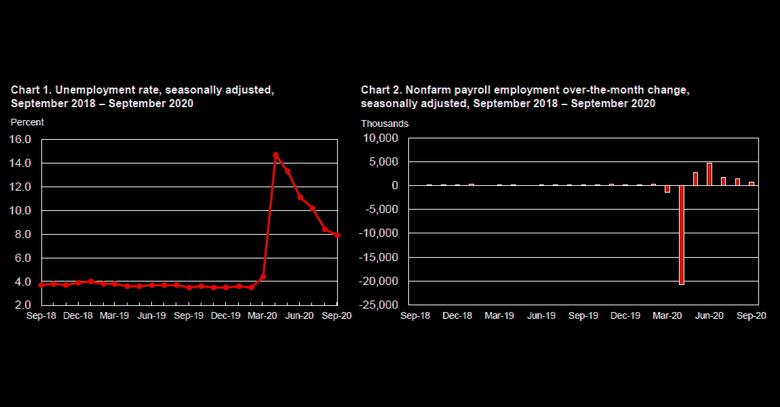 Total nonfarm payroll employment rose by 661,000 in September, and the unemployment rate declined to 7.9 percent, the U.S. Bureau of Labor Statistics reported today. These improvements in the labor market reflect the continued resumption of economic activity that had been curtailed due to the coronavirus (COVID-19) pandemic and efforts to contain it. In September, notable job gains occurred in leisure and hospitality, in retail trade, in health care and social assistance, and in professional and business services. Employment in government declined over the month, mainly in state and local government education.

In September, the unemployment rate declined by 0.5 percentage point to 7.9 percent, and the number of unemployed persons fell by 1.0 million to 12.6 million. Both measures have declined for 5 consecutive months but are higher than in February, by 4.4 percentage points and 6.8 million, respectively. (See table A-1. For more information about how the household survey and its measures were affected by the coronavirus pandemic, see the box note at the end of this news release.)

Among the unemployed, the number of persons on temporary layoff decreased by 1.5 million in September to 4.6 million. This measure is down considerably from the high of 18.1 million in April but is 3.8 million higher than in February. In September, the number of permanent job losers increased by 345,000 to 3.8 million; this measure has risen by 2.5 million since February. The number of unemployed job leavers rose by 212,000 to 801,000 in September. (Job leavers are persons who quit or voluntarily left their previous job and immediately began looking for new employment.) (See table A-11.)

In September, the number of persons employed part time for economic reasons (sometimes referred to as involuntary part-time workers) declined by 1.3 million to 6.3 million, reflecting a decrease in the number of persons whose hours were cut due to slack work or business conditions. The number of involuntary part-time workers is 2.0 million higher than in February. These individuals, who would have preferred full-time employment, were working part time because their hours had been reduced or they were unable to find full-time jobs. (See table A-8.)

The number of persons not in the labor force who currently want a job, at 7.2 million, changed little in September; this measure is 2.3 million higher than in February.

These individuals were not counted as unemployed because they were not actively looking for work during the last 4 weeks or were unavailable to take a job. (See table A-1.)

Among those not in the labor force who currently want a job, the number of persons marginally attached to the labor force, at 1.9 million, changed little in September. These individuals were not in the labor force, wanted and were available for work, and had looked for a job sometime in the prior 12 months but had not looked for work in the 4 weeks preceding the survey. The number of discouraged workers, a subset of the marginally attached who believed that no jobs were available for them, was 581,000 in September, also little changed from the previous month. (See Summary table A.)

In September, 19.4 million persons reported that they had been unable to work because their employer closed or lost business due to the pandemic--that is, they did not work at all or worked fewer hours at some point in the last 4 weeks due to the pandemic.

This measure is down from 24.2 million in August. Among those who reported in September that they were unable to work because of pandemic-related closures or lost business, 10.3 percent received at least some pay from their employer for the hours not worked.

About 4.5 million persons not in the labor force in September were prevented from looking for work due to the pandemic. This is down from 5.2 million in August. (To be counted as unemployed, by definition, individuals must either be actively looking for work or on temporary layoff.)

These supplemental data come from questions added to the household survey beginning in May to help gauge the effects of the pandemic on the labor market. The data are not  seasonally adjusted. Tables with estimates from the supplemental questions for all months are available online at www.bls.gov/cps/effects-of-the-coronavirus-covid-19-pandemic.htm.

Total nonfarm payroll employment rose by 661,000 in September, following larger gains in the prior 4 months. In September, nonfarm employment was below its February level by 10.7 million, or 7.0 percent. Notable job gains occurred in leisure and hospitality, in retail trade, in health care and social assistance, and in professional and business services. Employment declined in government, mainly in state and local government education. (See table B-1. For more information about how the establishment survey and its measures were affected by the coronavirus pandemic, see the box note at the end of this news release.)

Employment in leisure and hospitality increased by 318,000 in September, with almost two-thirds of the gain occurring in food services and drinking places (+200,000).

Despite job growth totaling 3.8 million over the last 5 months, employment in food services and drinking places is down by 2.3 million since February. Amusements, gambling, and recreation (+69,000) and accommodation (+51,000) also added jobs in September.

Retail trade added 142,000 jobs over the month, with gains widespread in the industry. Clothing and clothing accessories stores (+40,000) accounted for about one-fourth of the over-the-month change in retail trade. Notable employment increases also occurred in general merchandise stores (+20,000), motor vehicle and parts dealers (+16,000), and health and personal care stores (+16,000). Employment in retail trade is 483,000 lower than in February.

Manufacturing added 66,000 jobs over the month. Durable goods accounted for about two- thirds of the gain, led by motor vehicles and parts (+14,000) and machinery (+14,000). Despite gains over the past 5 months, employment in manufacturing is 647,000 below February's level.

In September, the other services industry added 36,000 jobs, largely in membership associations and organizations (+31,000). Employment in other services is 495,000 lower than in February.

Employment in information grew by 27,000 in September but is down by 276,000 since February. Motion picture and sound recording industries accounted for most of the September gain (+23,000).

Construction employment increased by 26,000 in September, with growth in residential specialty trade contractors (+16,000) and construction of buildings (+12,000). Construction employment is below its February level by 394,000. In September, wholesale trade added 19,000 jobs, with gains in both the durable and nondurable goods components (+13,000 and +8,000, respectively). Employment in wholesale trade is 312,000 lower than in February.

Employment in private education decreased by 69,000 in September, after a gain of similar magnitude in August. Employment in the industry is down by 355,000 since February.

Employment changed little in mining in September (+1,000). Employment in the industry is down by 133,000 since a recent peak in January 2019; about three-fourths of this decline has occurred since February of this year.

The change in total nonfarm payroll employment for July was revised up by 27,000, from +1,734,000 to +1,761,000, and the change for August was revised up by 118,000, from +1,371,000 to +1,489,000. With these revisions, employment in July and August combined was 145,000 more than previously reported. (Monthly revisions result from additional reports received from businesses and government agencies since the last published estimates and from the recalculation of seasonal factors.) 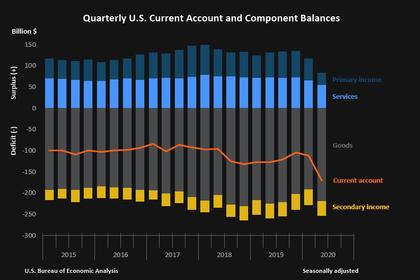 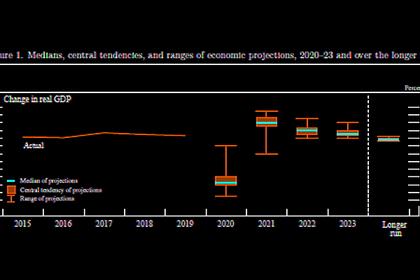 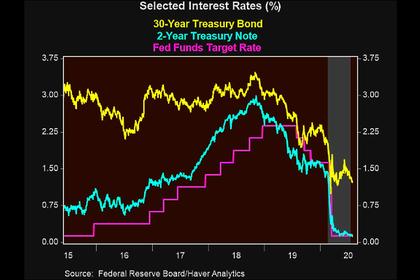 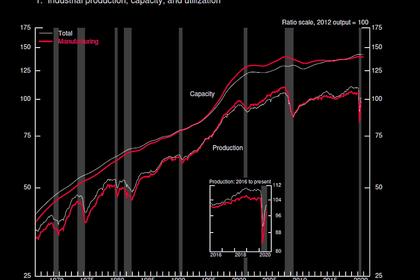 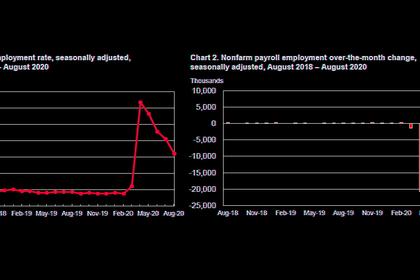