U.S. EIA - MARCH 24, 2020 - European natural gas storage inventories as of March 1, 2020, were 60% full—the highest ever recorded level for the start of March, according to Gas Storage Europe’s Aggregated Gas Storage Inventory (AGSI+). European stock levels for both January and February 2020 were the highest ever recorded for those months. Europe’s high levels of natural gas in storage are the result of a mild winter, which limited winter heating demand, and growing natural gas imports by pipeline and as liquefied natural gas (LNG).

Relatively mild winter weather across Europe—and especially in northern Europe, where natural gas heating is more common—reduced demand for residential and commercial heating. As a result, natural gas withdrawals from storage were lower than average, resulting in record-high January and February inventory levels. Europe’s natural gas storage capacity utilization for the first day of March has typically been 38%, based on the previous five years; in 2020, natural gas stocks in Europe started March at 60% of capacity.

High natural gas stocks were partly the result of record-high deliveries to Europe both by pipeline and as LNG in 2019. LNG imports into Europe had been relatively low between 2012 and mid-2018, but they increased substantially in 2019, averaging 11 billion cubic feet per day (Bcf/d) or almost twice the volume in the two previous years. LNG imports set monthly records of 14 Bcf/d in December 2019 and February 2020 (excluding re-exports, where a country imports and then exports LNG), implying a Europe-wide regasification capacity utilization of almost 60%.

Russia and the United States increased LNG exports to Europe last year by an estimated 1.4 Bcf/d and 1.5 Bcf/d, respectively, compared with 2018. The United States has been the largest LNG supplier to Europe since November 2019, and in February 2020, LNG imports from the United States reached a new record high at 5.1 Bcf/d—nearly double the volume of Europe’s second-largest supplier, Qatar. 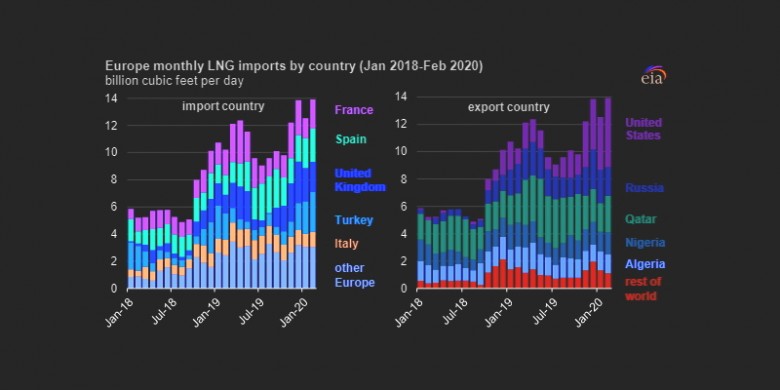 European pipeline import capacity has increased in recent years, including the Trans-Anatolian Pipeline from Azerbaijan. Additional sources of supply into the European market are entering service this year. In January, the Turk Stream pipeline entered service, delivering natural gas under the Black Sea directly to Turkey and Bulgaria. The Trans Adriatic Pipeline, which will deliver natural gas from Azerbaijan to southeast Europe, is currently undergoing commissioning and should be completed in mid-2020.

European natural gas prices were at relatively low levels in 2019 and continue at those levels so far in 2020. The spot price of natural gas at the United Kingdom benchmark National Balancing Point (NBP) averaged $3.66 per million British thermal units (MMBtu) in January 2020, an all-time low for the month. Similarly, the price of natural gas at the Title Transfer Facility (TTF) trading hub in the Netherlands averaged $3.62/MMBtu in January, also a record low for the month and less than half of the 2018 average price. 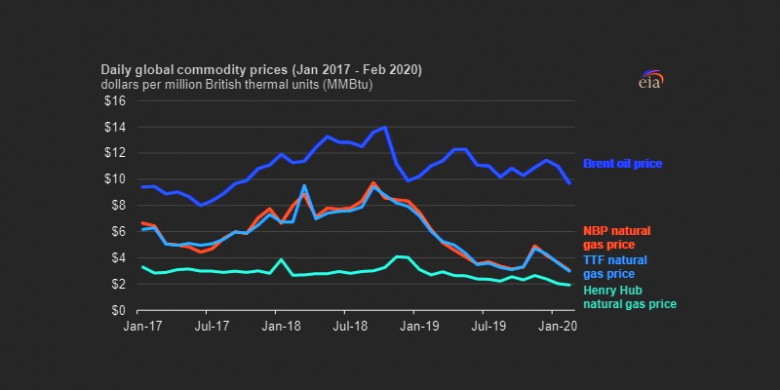 EUROPEAN SHARES UP
In a co-ordinated global effort to stabilize financial markets in one of the biggest routs on record, Germany launched a stimulus package of up to 750 billion euros, while the U.S. Federal Reserve took unprecedented steps to shore up credit across the economy.
English

EURO BONDS DOWN
Government bond yields across the euro zone fell on Thursday after the European Central Bank stepped in with emergency stimulus measures to calm markets in the face of the coronavirus outbreak.
English