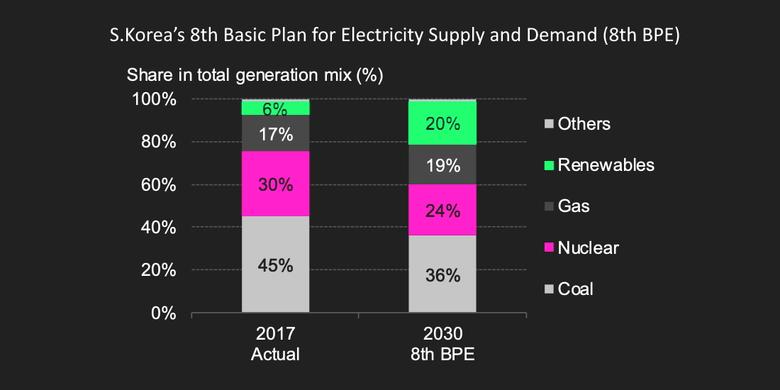 The Ministry of Trade, Industry and Energy said in a statement that 21 to 28 coal-fired power plants would be closed from March 1 to March 31 in an effort to reduce emissions of fine dust.

While the exact scope of the coal-fired power plants' shutdown would be determined on the basis of electricity demand during the period, the country would be ready to raise operating ratio of natural gas-fired power plants to avoid any supply disruptions, a ministry official said.

"The government will try to keep as many coal power plants idle as possible on the condition of stable electricity supply," the official said.

The statement did not provide a list of the coal power plants that would be shut. But the ministry official said "aged, more polluting plants will be the first to be taken offline."

Coal power plants that will not shut down will operate at no higher than 80% capacity in March, the ministry said.

"The government has decided to expand the scale of coal power plants shutdown in March because the country's electricity demand is expected to slow down in the spring season," the official said.

The country shut 8 to 15 coal-fired power plants over the peak winter season for three months from December 2019 to February.

It was the first time that South Korea suspended operations of coal-fired power plants in the winter season, when the country's power demand normally gets a boost.

The shutdown of the coal-fired power plants during the December-February period reduced the country's emission of fine dust by 39.4% year on year, the ministry official said.

The proposal also calls for the country to shut 22 to 27 coal-fired power plants for 31 days in March, when electricity demand weakens.

South Korea is the world's third largest importer of LNG, after Japan and China, with an annual consumption of 30 million-40 million mt.