How can we, as a community of Clean Power and Generation Professionals, help those who interface with the public about our activities and work? Why might this be important? These questions were at the forefront as some of us watched the democratic debate in Las Vegas on February 19th, 2020. Two utility-scale solar power plants were mentioned, though not by name and not with any clarity. This is by no means a political discussion and is simply provided as an example of how easily energy generation systems can be entangled in front of a large audience. Jon Ralston from the Nevada Independent asked the candidates a question. As the transcript demonstrates, Former Vice President Joe Biden tried to say a solar project's name, “Tech,” twice. Taking into account his admitted speaking issues, and the fact that he visited the Techren Solar Project in December 2019, it was most likely this photovoltaic (PV) solar plant to which he was referring. That project, in Eldorado Valley, Nevada, is being developed by Techren Solar LLC of Irvine, California. The Techren Solar I, II, III, IV, and V (which is currently in construction) will provide a combined nameplate capacity of approximately 400 megawatts (MW). Techren Solar is part of a series of power plants that represent the largest clean energy investments in Nevada history. 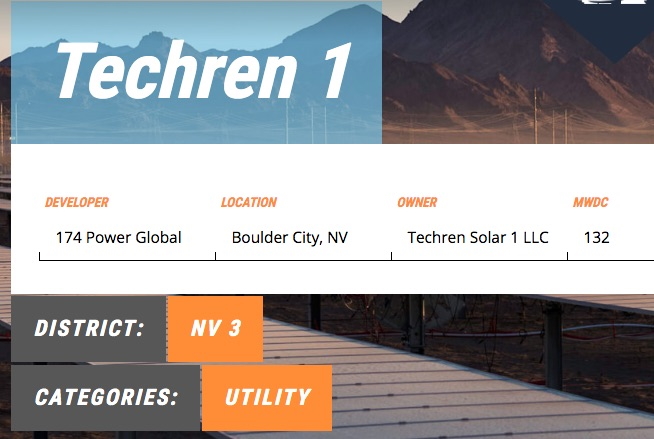 Some Specifics of the Techren Solar Project from the 174 Power Global website, https://174powerglobal.com/

Therein lies the beginning for the framing of the issue. Investors need confidence in order to finance these generation projects and get them connected to the grid. They also need to know that policy measures will be long-standing and consistent, at least until the return on their investment. Their contributors are often members of the public, as well as other financial institutions.

As the discussion continued, Former Mayor Bloomberg was visibly confused with Mr. Biden’s response and he referred, although not by name, to the troubled Crescent Dunes Solar Energy Project. The publication which he owns, Bloomberg Businessweek, published an article on it on January 6, 2020 written by Chris Martin and Nic Querolo – A $1 Billion Solar Plant Was Obsolete Before It Ever Went Online

This article, and the Crescent Dunes project have been discussed in other Energy Central postings. A Utility Dive posting also provides some background. The Bloomberg article cited several reasons for the difficulties, including the plant’s lack of reliability. It states, “The steam generators at Crescent Dunes require custom parts and a staff of dozens to keep things humming and to conduct regular maintenance.” So it would seem that it is a plant design and O&M issue. The issue and concern here, however, is that people, especially investors, not confuse the two types of solar technologies (PV and CSP), and specifically should not draw general conclusions from a particular CSP solar plant.

A day after the debate, I went over the dialogue in my mind and, and after a search on the internet, finally realized the full nature of the exchange. If it took a solar energy professional, such as myself, this long to understand what was being said, just consider what confusion others might have. I first posted my findings and thoughts on both LinkedIn and on Quora. I contacted both the Solar Energy Industries Association, SEIA, and several other groups, including the journalist who asked the original question. This did lead to his colleague's entry in the paper's environment newsletter. Success!

The question is whether adding such clarifications is necessary and what are the consequences of not doing so. It's also a question of how, and where, best to do this and by whom. When is education and outreach necessary for the global electric utility industry? Are there any other places where such analyses should be made available? There are a number of organizations that come to mind. The question is whether they speak for the industry and can they rapidly and effectively respond to situations in which clarification is important. The list includes: the SEIA, the U.S. DOE, NREL and the IRENA. NREL's concentrating solar power (CSP) program provides some tools for Techno-Economic Analysis. In the international arena, the IRENA has some cost analysis for CSP and other renewables. There are perhaps a myriad of others that come your mind.