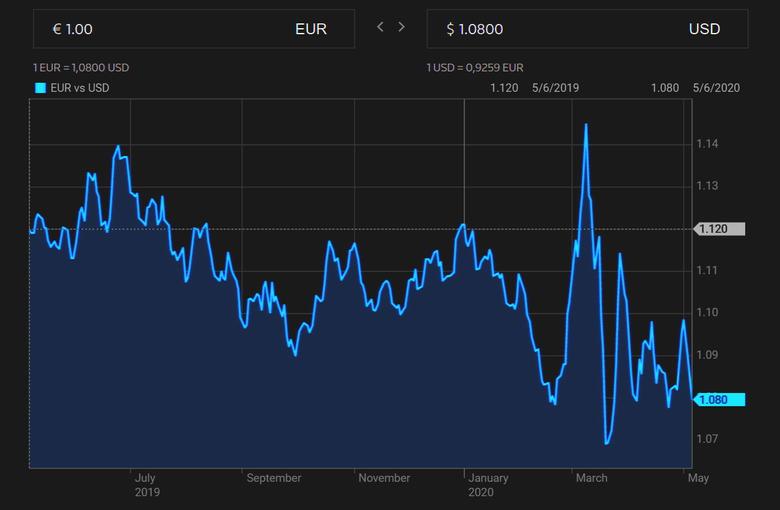 REUTERS - MAY 6, 2020 - The pound recovered some losses against the dollar in early London trading and rose against the euro, as investors grappled with the pound's downside risks before the Bank of England's meeting on Thursday.

The UK has overtaken Italy to report Europe's highest official death toll from COVID-19, the disease caused by the new coronavirus, data on Tuesday showed, increasing the pressure on Prime Minister Boris Johnson over his response to the crisis.

The Bank of England will meet on Thursday and will attempt to quantify the economic impact of lockdown measures, which official budget forecasters predict could push Britain's economy into the worse collapse in 300 years.

Britain has been slower than other European countries to lay out plans to re-open its economy. Johnson is due to review the lockdown measures on Thursday.

"Another three weeks of lockdown, or close to that, is likely to be confirmed by PM Johnson on Sunday, underlining again the fact that the UK is behind the rest of Europe in this crisis," wrote Derek Halpenny, a strategist at MUFG.

"We continue to see downside risks for the pound given the severity of the COVID impact looks to be greater in the UK than elsewhere," he said.

The euro reached an eight-day low against the dollar early on Wednesday after a court decision on Tuesday challenged Germany's participation in the euro zone's stimulus programme.

Construction PMI data is due at 0830 GMT on Tuesday. Economists polled by Reuters predict another month of steep decline, despite the fact that builders faced less pressure than other industries to shut down operations because of the coronavirus outbreak.

Nightmarish economic data has become the new normal, to the data is likely to have little market impact [GBPMIC=ECI].

The UK continues to face the challenge of negotiating trade deals with the United States and the European Union.

Formal U.S.-UK trade negotiations began on Tuesday, with both sides issuing a joint statement saying that talks would take place at an accelerated pace.

But trade talks between Britain and the EU will hit a crisis point unless there is progress in the coming weeks, Irish Foreign Minister Simon Coveney warned on Tuesday.