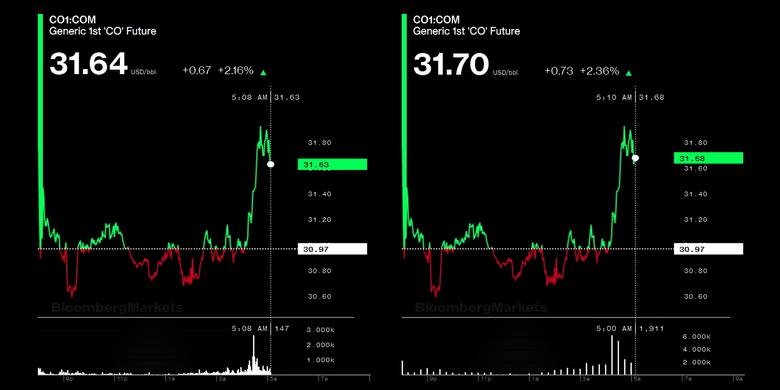 REUTERS - MAY 6, 2020 - Oil rose above $31 a barrel on Wednesday as hopes for a recovery in demand as some countries ease coronavirus lockdowns offset a report showing a higher-than-expected rise in U.S. inventories.

Brent crude has almost doubled since hitting a 21-year low reached on April 22, supported by expectations demand will recover and by a record supply cut led by the Organization of the Petroleum Exporting Countries.

"Clearly, the optimism of the re-opening of the global economy has supported the oil rally," said Naeem Aslam, analyst at Avatrade.

But in a reminder that a supply glut persists, the American Petroleum Institute said on Tuesday that U.S. crude inventories rose by 8.4 million barrels last week, more than analysts expected.

"We're talking about normalisation of supply and demand but we've got a long way to go," said Lachlan Shaw, National Australia Bank's head of commodity strategy.

Italy, Spain, Nigeria and India, as well as some U.S. states began allowing some people to go back to work and opened up construction sites, parks and libraries.

Germany's federal government and 16 states have agreed on ways to ease the lockdown.

The easing of lockdowns should lead to a recovery in global oil demand, which in April was expected to collapse by at least 20%, an unprecedented drop, as governments told people to stay at home.

To tackle the resulting glut, OPEC and its allies agreed to a record oil output cut of 9.7 million barrels per day, about 10% of pre-coronavirus demand. That reduction began on May 1.

For now though, soaring inventories are a reminder of excess supply lingering in the market.

Traders will be looking for confirmation of the API's inventory report when the official U.S. government figures come out later on Wednesday.