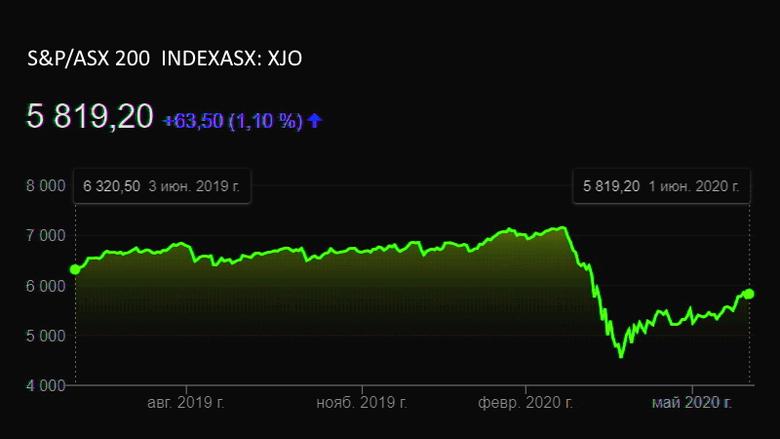 REUTERS - JUNE 1, 2020-  Australian shares kicked off the month with a more than 1% gain, fuelled by optimism around further easing of coronavirus-induced restrictions and as heavyweight mining stocks rallied amid a surge in commodity prices.

The S&P/ASX 200, currently on a five-week winning run, closed 1.1% higher at 5,819.20 on Monday. The index soared more than 30% since hitting a more than seven-year low in March when the pandemic forced widespread curbs and shutdowns.

Investors buying into the rhetoric of economic recovery Down Under cheered as several Australian states eased social distancing curbs further and helped shrug off uncertainty around protests and riots across the United States.

Washington's measured response to top metals consumer China over a new security law in Hong Kong, and an uptick in Chinese factory activity and services and construction sectors in May, helped support iron ore and copper prices.

"Having negotiated some potentially deep political potholes, and with a slew of data suggesting that, for now, the COVID-19 recovery is on track, momentum is clearly lying with the peak-virus trade as the week starts," OANDA analyst Jeffrey Halley said.

A sub-index of miners stood out with a 3.3% gain and touched its highest level since Feb. 24 after Chinese iron ore futures climbed to a 10-month peak.

Shares of BHP and Rio Tinto each touched a more than three-month high, while Fortescue surged 6.2% to a record high.

Unease over escalating unrest in the United States after the death of George Floyd in police custody rattled investors, but boosted prices of safe-haven assets such as gold. Australia's biggest gold miner Newcrest ended 3% firmer.

Looking ahead, the Reserve Bank of Australia's policy meeting on Tuesday will be the highlight of the week, though markets expect no major surprises.

New Zealand stock markets were closed for a holiday.