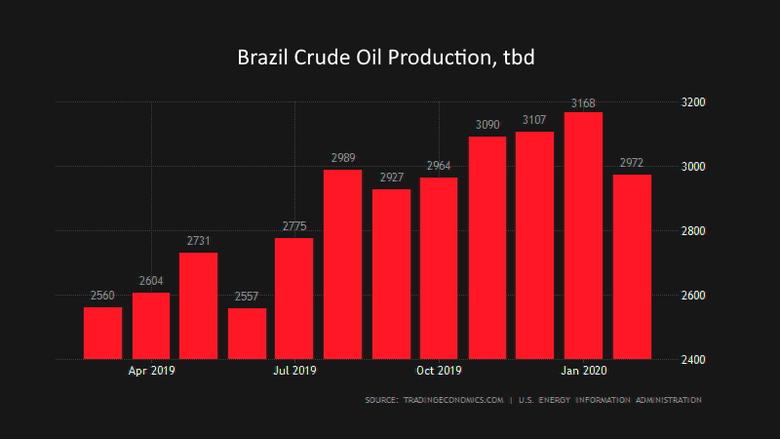 PLATTS - 02 Jun 2020 - Brazil's crude oil and natural gas production remained stable in April as the global coronavirus pandemic had a limited impact on output in Latin America's biggest producer, according to data released by the National Petroleum Agency (ANP) June 2.

Brazil's oil industry has emerged from the global outbreak relatively unscathed, with production temporarily halted at two offshore floating production units operated by state-led Petrobras until the ships were disinfected. Dommo Energia also suffered an outbreak onboard the FPSO OSX-3 in May, but reported no impact on output in a production report released June 1.

The Mines and Energy Ministry said June 1 it registered a total of 378 confirmed coronavirus cases, 842 suspected cases and 12 deaths in Brazil's energy industry, which includes Petrobras and other state entities.

In addition, Brazil has benefited from the gradual restart of economic activity in China, which is the country's biggest trade partner and a key buyer of crude, iron ore and soy products. Petrobras ramped up exports of crude and refined products when domestic demand cratered because of social distancing measures were implemented in mid-March, with about 60% of the company's record crude and bunker fuel exports headed for China.

Brazilian crude grades naturally contain less than 0.5% sulfur content, which makes them ideal for processing into bunker fuel under the International Maritime Organization's 2020 mandate. The mandate, which went into effect January 1, increased demand for Brazilian grades and supported prices for the crude despite recent volatility, according to industry officials.

The better-than-expected international demand forced Petrobras to walk back 200,000 b/d worth of production cuts announced in late March, with Petrobras targeting production of 2.26 million b/d in April. rather than 2.07 million b/d.

The year-on-year production growth was driven by the continued ramp up of several new floating production units installed at subsalt fields over the past two years, including a fleet of four vessels that were installed at the Buzios Field starting in mid-2018. Output, however, is expected to drift lower in the second half of 2020 amid Petrobras' plan to carry out a wide-ranging maintenance program at subsalt fields.

The program, which was delayed after the social distancing measures were implemented, will shutter each of the major subsalt floating production units for 15-20 days each. The workovers will improve efficiency and check the integrity of subsea equipment installed at the ultra-deepwater sites, according to Petrobras.

The Lula Field, which was the first major subsalt field to enter production in 2010, remained Brazil's biggest oil and gas producer in April at 1.033 million b/d and 45.7 million cu m/d, the ANP said. The Lula, Buzios and Sapinhoa subsalt fields are Brazil's three largest production assets, accounting for nearly 60% of the country's crude production.