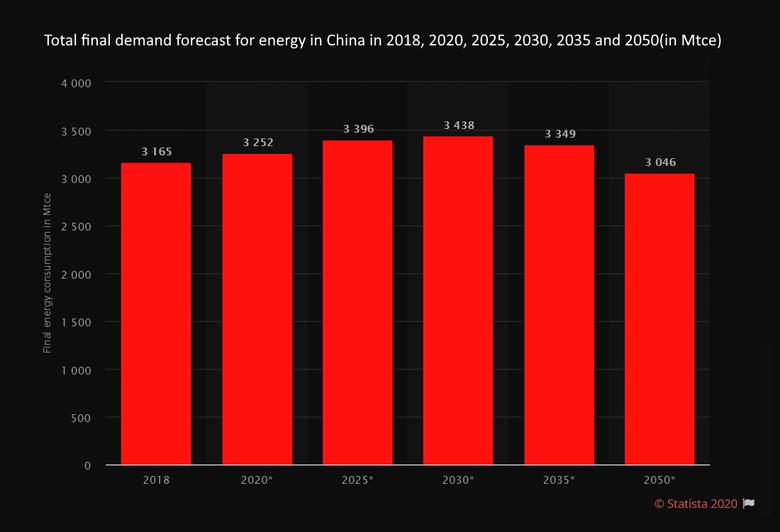 PE - China's oil and gas demand is growing again as the world's largest energy consumer works to ramp up activity now its Covid-19 outbreak is largely under control.

But the recent rebound in domestic oil and gas consumption may be difficult to sustain over the rest of the year, as recent data for the Chinese economy suggests an uneven and difficult road to recovery that could weigh on energy demand.

Recent indicators for China, which is also the largest importer of oil and gas in the world, were encouraging and indicate the energy market is shaking off the virus shock. Crude oil imports climbed by 1.7pc from March, to 40.43mn t, or the equivalent of 9.84mn bl/d, according to data released by Chinese customs on 7 May.

Natural gas imports, comprising LNG and pipeline supplies, stood at 7.67mn t in April, up on both March and a year earlier. The increase was driven by higher LNG imports, which climbed by 12.3pc year-on-year, to 5.1mn t. This was a strong recovery from the weak 2pc rise seen in the first quarter of 2020. Conversely, pipeline imports slumped by 20.4pc year-on-year, marking the biggest annual decline in piped volumes since 2017 as imports were squeezed by a greater preference for LNG and domestic output amid gradually recovering gas demand.

Higher consumption has supported rising imports. Chinese oil demand plunged by c.20pc in March after the country entered lockdown in February. But demand is set to recover to around 13mn bl/d in the second quarter of this year, which would be 16.3pc higher than in the preceding quarter, according to Wood Mackenzie. The consultancy forecasts China's oil demand is to rise by a modest 2.3pc year-on-year for the first half of 2020, to 13.6mn bl/d.

Refinery runs have picked up as more factories and businesses get back to work. Chinese refiners processed a total of 53.85mn t of crude oil in April, roughly equivalent to 13.1mn bl/d and 11pc higher than the previous month's throughput.

China's crude runs during the first four months of 2020 reached a total of 203.48mn t, equal to 12.28mn bl/d and down by 3.4pc from a year earlier. This reflected the drop in demand amid the coronavirus curbs.

Chinese crude runs increased in April on stronger margins and a recovery in diesel demand. The country adjusts its wholesale gasoline and diesel prices to reflect Brent crude oil prices in a range of $40-130/bl. But Beijing does not cut product prices any further once Brent falls below $40/bl—effectively setting up a price floor to protect domestic oil suppliers.

With Brent trading around $36/bl and domestic retail prices still reflecting a $40/bl price environment, paper margins for Chinese refiners are at their highest in years. This has encouraged them to boost throughput.

China's diesel demand has recovered faster than expected from the coronavirus-induced collapse in February, which continued during most of March. As people have returned to work, the preference of commuters for private cars over public transport has helped lift gasoline demand. Meanwhile, a thriving e-commerce sector has supported freight transport, benefiting diesel consumption.

Improving gasoline and diesel demand is important because transport accounts for around 60pc of China's oil consumption. Demand was expected to continue to rise during May, although the upside may have been temporarily capped as China's postponed annual parliamentary and political advisory sessions took place between 22 and 27 May in Beijing.

The week-long series of meetings is China's most important political event of the year but was delayed by more than two months from its normal schedule in early March. The meetings took place recently as China has successfully brought the coronavirus under control, although concerns linger over sporadic renewed outbreaks. Many factories were shut down and restrictions on road transport were imposed during the sessions to ensure public security and less severe smog.

China's gas demand has remained robust since the beginning of the Covid-19 outbreak, shielded to some extent by an extended heating season and domestic price cuts that have helped ensure the fuel remains competitive against other energy sources.

Gas consumption in the first four months of 2020 edged up by 1.5pc year on year, to 104.45bn m3, with demand in April alone up by 8.9pc, to 25.95bn m3, according to state economic planner the National Development and Reform Commission.

But domestic production has fared better, with April's output surging by 14.3pc year-on-year, to 16.1bn m³. This was the fastest growth rate since October 2017 and considerably higher than the 10.3pc year-on-year increase seen in the first quarter.

But while China continues to paint a somewhat optimistic picture of what its recovery could look like, the recent oil and gas demand uptick comes with some significant caveats.

April's indicators suggest China's gas demand emerged largely unscathed from the economic standstill in the first quarter, but a lack of storage data means it is unclear how much of the gas—produced domestically or imported—has been stored instead of consumed.

There were reports that a significant share of domestic output and imports of gas, at least for the first few months of this year, ended up in storage. Part of the reason why state-owned importers Cnooc and China National Petroleum Corporation reportedly attempted to declare force majeure on some LNG shipments in February and March was because LNG storage tanks at receiving terminals were full.

There are other signs that demand has been weaker than implied by data. Kazakhstan has reduced pipeline gas exports to China by 12-15pc, taking them down to the equivalent of 17-18mn m3/d, at the request of Beijing due to reduced demand following Covid-19, Kazakh energy minister Nurlan Nogayev confirmed on 27 May. Nogayev's comments came after the head of Uzbekistan's state-owned oil and gas company Uzbekneftegaz said in early May that Turkmenistan, Kazakhstan and Uzbekistan were in talks to share a cut in pipeline gas exports to China. The three Central Asian countries exported a combined 10.2mn t of gas to China in the first four months of 2020, the equivalent of 14.1bn m3 and down by 10.9pc year on year.