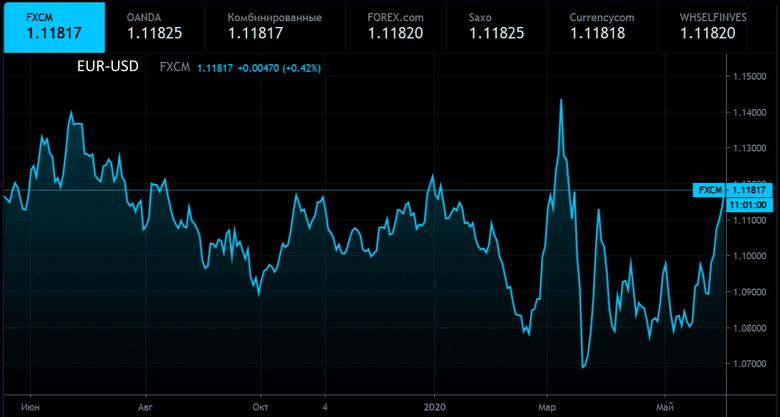 REUTERS - JUNE 2, 2020 -  The euro reached an 11-week high on Tuesday as the dollar lost ground, with investors maintaining their hopes for a global economic recovery.

The optimism persisted within markets despite growing concern over U.S.-China tensions and mass protests across the United States over the death of a black man in police custody.

Traders remain hopeful that central banks will continue to buy government bonds and other financial assets to protect their economies from the coronavirus pandemic.

The European Central Bank, for instance, is expected to increase its 750 billion-euro Pandemic Emergency Purchase Programme, or PEPP, on Thursday, probably by around 500 billion euros.

The Bank of Japan, ECB and the Federal Reserve have increased their balance sheets by 10%, 20% and 70% respectively since the start of this year, said Kit Juckes, macro strategist at Societe Generale.

“The strengthening of the commodity-linked currencies and the weakening of the safe havens suggest that investors’ appetite remained supported for another day,” said Charalambos Pissouros, senior market analyst at broker JFD Group.

"It seems that investors continued placing bets on the prospect of a global economic recovery as governments around the globe continue to ease their lockdown measures," Pissouros said.

The U.S. dollar index against a basket of six major currencies fell to its weakest since mid-March, at 97.44, before settling in neutral territory at 97.82. 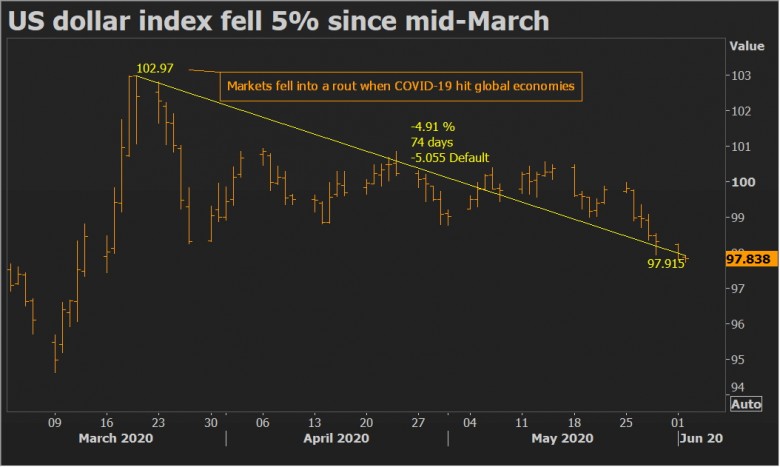 The index has fallen about 5% from a peak hit in March, when panic over the COVID-19 pandemic gripped the world’s financial markets, prompting investors to scramble for the safety of dollars.

George Saravelos, a currency strategist at Deutsche Bank, said he expects the dollar to weaken about 10% in narrow trade-weighted terms to fully take out the risk premium, adding that so far the currency has fallen 3%. He sees euro/dollar rising to $1.15.

Market risk sentiment was hurt only slightly on Monday when Bloomberg reported China had told state-owned companies to halt purchases of soybeans and pork from the United States, raising concern that the trade deal between the world’s two biggest economies could be in jeopardy.

Later, it emerged that state-owned Chinese companies bought at least three cargoes of U.S. soybeans on Monday, even as sources in China said the government had told them to halt purchases.

Optimism has so far also survived the rising social unrest in the United States, where President Donald Trump vowed to deploy the military to halt violence if mayors and governors failed to regain control of the streets.

The protests erupted over the death of George Floyd, a 46-year-old African-American who died in Minneapolis police custody after being pinned beneath a white officer’s knee for nearly nine minutes.

Elsewhere, the pound rose to a one-month high of $1.2567 after reports that Britain may be willing to compromise on fisheries and trade rules if the European Union agrees to back off from its demands related to regulatory alignment and fishing access.