FRANCE'S ECONOMY WILL DOWN 11% 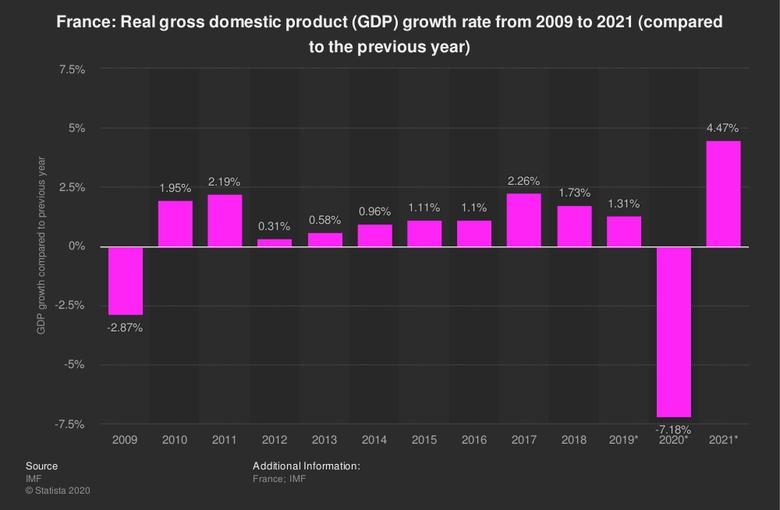 FRANCE'S ECONOMY WILL DOWN 11%

REUTERS - JUNE 2, 2020 - The French economy is set to contract 11% this year due to the coronavirus crisis and more hard days lie ahead until things bounce back next year, Finance Minister Bruno Le Maire said on Tuesday.

France imposed one of the Europe's strictest lockdowns in mid-March and only began removing restrictions on May 11. Cafes, bars and restaurants were only allowed to reopen for regular business on Tuesday.

"We were hard hit by the virus, we took effective measures to protect French people's health but the economy practically ground to a halt for three months," Le Maire told RTL radio.

"We're going to pay for it with growth," he said, adding that a budget update being prepared would forecast a contraction of 11% versus one of 8% forecast previously.

With some 300,000 cafes, bars and restaurants reopening on Tuesday, Le Maire said that they would continue to benefit from handouts from a government solidarity fund until the end of the year to help cover fixed costs.

"Even if it is hard to hear on a day when the sun is shining and the cafes are reopening, the hardest part is still ahead of us in social and economic terms," Le Maire said.

The government is trying to avert a string of retail bankruptcies by seeking buyers for big clothing chains Camaieu, Conforama and La Halle, which employ thousands of people, Le Maire said.

Le Maire has already announced sector-specific support plans for the tourism ad car industries this month. He said measures for the aerospace industry were being prepared for next week and the start-up and building sectors would follow afterwards.