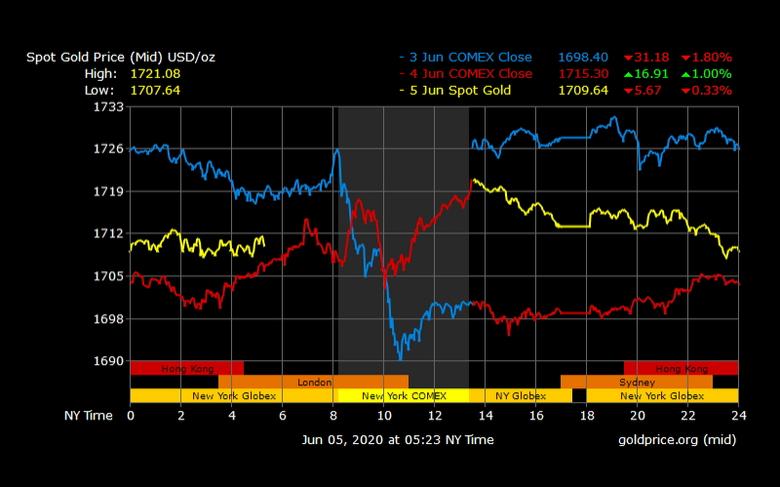 REUTERS - JUNE 5, 2020- Gold eased on Friday ahead of a key U.S. jobs report and looked set for a third consecutive weekly decline as hopes for an economic recovery stoked interest in assets seen as higher risk, like stocks, at the metal's expense.

Bullion has declined about 1% so far this week, and is on track for its biggest fall since the week ending May 1.

However, spot prices remain just 3% below the seven-year high they hit last month after central banks released a wave of stimulus measures to combat a coronavirus-linked slowdown.

Despite some losses earlier in the session, Asian equities were poised for their biggest weekly rise since 2011.

Investors are now awaiting U.S. nonfarm payrolls data for May due at 1230 GMT. Payrolls are seen falling by 8 million after a record 20.537 million plunge in April, according to a Reuters survey.

The data comes ahead of a two-day policy meeting of the U.S. Federal Reserve next week. The European Central Bank on Thursday approved a larger-than-expected expansion of its stimulus package.

More stimulus and lower interest rates tend to benefit gold, which is often seen as a hedge against inflation and currency debasement.

"Gold prices have levelled off in past few weeks," said ANZ commodity strategist Soni Kumari. "We see $1,670 as the key support and $1,750 as the key resistance."