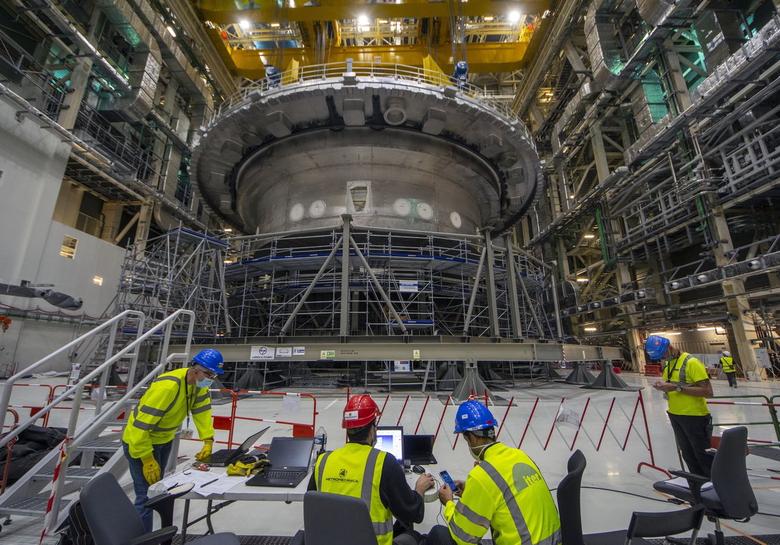 WNN - 29 May 2020 - The 1250-tonne steel base of the cryostat - which will insulate the magnetic system at cryogenic temperature from the outside environment - has been installed at the International Thermonuclear Experimental Reactor (ITER) at Cadarache in south-eastern France. The milestone marks the installation of the first and heaviest component of the ITER fusion machine.

The operation marked the culmination of a ten-year effort to design, manufacture, deliver, assemble and weld one of the most crucial components of the ITER machine - the 30-metre-high, 30-metre-in-diameter ITER cryostat (of which the base is only one part). Procured by India, manufactured in segments by Larsen & Toubro Ltd at its Hazira factory, the cryostat is being assembled and welded on site under the supervision of the Indian Domestic Agency. The elements for the base section were delivered to ITER in December 2015 and the component was finalised in July 2019. Taking over from the Indian Domestic Agency, the Iter Organisation then proceeded with "pre-assembly work" before moving the component into the Assembly Hall one month ago.

"The coming moments will stand out in the minds and memories of us all. What you will accomplish today, as a team, is something that has never been done before in history - and although you have rehearsed it many times, it will be a first-of-a-kind operation," said Iter Director-General Bernard Bigot at the start of the operation to install the component. "We trust the engineering calculations, strategy and control. We trust the materials science. We trust the metrology. But my confidence today is because I trust you to work as one committed and highly professional team, convinced as we all are that failure is not an option."

In an operation that started on the morning of 26 May, the base of the ITER cryostat was gradually lifted by crane from its support frame to a height of 24 metres. It was then transported 110 metres from the entrance of the Assembly Hall, passing above and over the two 20-metre-high sector sub-assembly tools, eventually reaching the circular opening of the machine assembly pit. There, the cryostat base descended into the deep concrete cylinder onto 12 hydraulic jacks that will support its weight until final metrology and adjustments are performed and the load can be transferred to the cryostat support bearings. The operation was completed on the afternoon of 27 May.

ITER will be a 500 MW tokamak fusion device (requiring an input of 50 MW) designed to prove the feasibility of fusion as a large-scale and carbon-free source of energy. The European Union is contributing almost half of the cost of its construction, while the other six members (China, India, Japan, South Korea, Russia and the USA) are contributing equally to the rest. The target for first plasma is 2025.