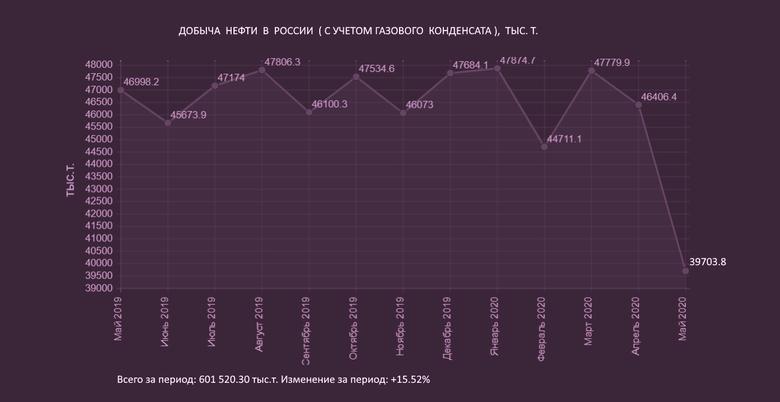 REUTERS - JUNE 2, 2020-  Russian oil and gas condensate production fell to 39.7 million tonnes (9.39 million barrels per day) in May, near its target under a deal within the OPEC+ group, Interfax news agency reported on Tuesday, citing energy ministry data.

The figure was in line with data from sources, reported by Reuters on Monday, and down from 11.35 million barrels per day (bpd) in April.

Under the agreement between Russia and the Organization of the Petroleum Exporting Countries, a group known as OPEC+, Moscow has pledged to reduce its output by around 2.5 million bpd to 8.5 million bpd to help support oil prices. The deal does not include output of gas condensate, a light oil.

The ministry does not disclose gas condensate output on a monthly basis separately.

OPEC+ agreed to cut its combined output by around 10 million bpd, or 10% of global oil production, in May and June, with a subsequent easing of the reductions, to tackle economic fallout from the coronavirus pandemic.

OPEC+ may hold an online conference as early as Thursday to discuss its policy, compared with the original schedule of next week. The group is due to discuss extension of the output cuts in its current pace.