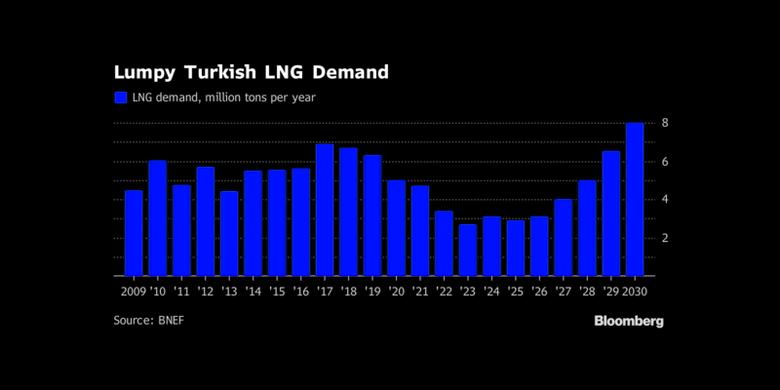 Turkey imported 2.06 billion cubic meters of LNG in March, which accounted for 52.5% of total gas imports, according to data of the Energy Market Regulatory Authority (EMRA).

The increase in LNG imports can be partially attributed to the country's expansion of its LNG infrastructure capacity in recent years. Turkey's LNG facilities can cope with up to 120 million cubic meters of natural gas per day with LNG terminals and floating storage and regasification units (FRSU).

As spot LNG prices continue to fall and with the glut of supply, Turkey wants to benefit from lower international prices and has increased LNG imports while keeping pipeline gas imports to a minimum.

The country imported 3.9 billion cubic meters of natural gas in March, marking a decrease of 8.2% compared with March last year, the data showed.

Turkey’s Petroleum Pipeline Company (BOTAŞ) made the majority of the imports, at 95.3%, while the private sector imported the remaining share.

LNG imports from the U.S. increased by 300% in March compared to the same month last year. The remaining share of LNG imports came from Algeria, Nigeria, Cameroon and Egypt.

Imports from Russia, a country, which historically supplied a huge share of Turkey's natural gas supplies, were down by 72% in March compared with March 2019. Imports from Iran also fell by 33%.

Turkey's Deputy Energy and Natural Resources Minister Alparslan Bayraktar earlier this month said LNG imports accounted for 28% of Turkey's total natural gas imports in 2019 and that at least one-third of the country's natural gas supply is expected to come from LNG in 2020.

He noted that 44% of gas came through LNG in the first four months of the year but that the number would come down in the coming months.

Bayraktar said 40% of LNG imports in the first four months had come from the United States, adding that this contributed to a $100 billion trade target between Turkey and the U.S.