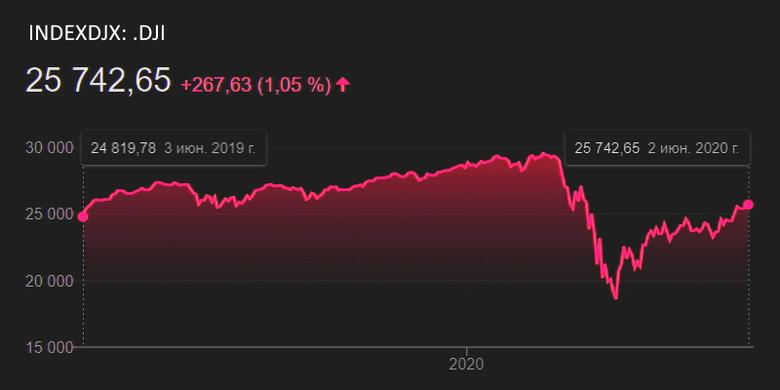 REUTERS - JUNE 2, 2020 -  A late-session rally pushed Wall Street to solid gains on Tuesday as market participants looked past widespread social unrest and pandemic worries to focus instead on easing lockdown restrictions and signs of economic recovery.

Tech shares, along with cyclical stocks like industrials and financials, gave the biggest lift to all three major stock indexes.

The Nasdaq, the S&P 500 and the Dow have been approaching their all-time closing highs in recent weeks and are now about 2%, 9% and 13%, respectively, below record closing levels.

The S&P 500 and the Nasdaq have closed in positive territory in six of the last seven sessions.

"Technicals are pushing the market higher and the market's not paying attention to the potential problems that the protests could have on local economies," said Peter Cardillo, chief market economist at Spartan Capital Securities in New York.

Nationwide, violent protests over the death of a black man at the hands of law enforcement officers continued unabated, even as President Donald Trump vowed to unleash the military on the demonstrators.

“If the violence continues it might worsen the coronavirus’ impact on businesses,” Cardillo added. “A lot of stores would close; there’d be curfews; people wouldn’t be able to shop and that would further hurt the economy.”

But the green shoots of economic rebound driven in no small part by massive stimulus packages from Capitol Hill and the U.S. Federal Reserve has helped fuel investor optimism.

Market participants now await Friday’s crucial jobs report from the Labor Department for a clearer picture of the extent of economic damage wrought by mandated lockdowns. The report is expected to show the unemployment rate surging to a historic 19.7%.

All 11 major sectors in the S&P 500 ended the session in the black, with energy and materials enjoying the largest percentage gains.

The ARCA Airline index, whose constituents have been hit particularly hard by COVID-19-related restrictions, was up 3.8% boosted by a slow but steady increase in commercial air traffic.

Southwest Airlines Co rose 2.6% after extending buyout and paid leaves to employees in what its chief executive called an effort to “ensure survival.”

Shares of Slack Technologies Inc advanced 3.2% after Cowen initiated coverage of the workspace communication platform with an “outperform” rating.

A report that Western Union has made an offer to buy smaller rival MoneyGram International Inc sent the money transfer companies shares up by 11.3% and 29.7%, respectively.

Shares of luxury retailer Tiffany & Co dropped 8.9% following a report from WWD that its deal with LVMH is seen as uncertain amid the deteriorating U.S. market.

Advancing issues outnumbered declining ones on the NYSE by a 2.89-to-1 ratio; on Nasdaq, a 1.69-to-1 ratio favored advancers.

Volume on U.S. exchanges was 10.72 billion shares, compared with the 11.35 billion average over the last 20 trading days.