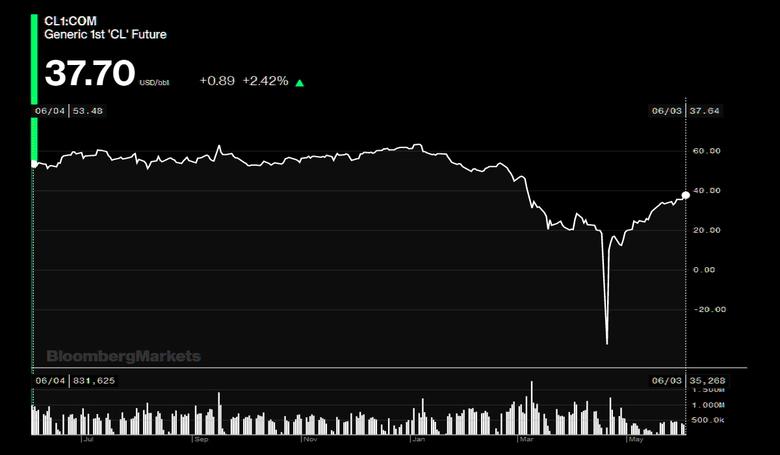 BLOOMBERG - As OPEC+ producers head toward a consensus on extending output curbs, oil's rally is prompting some U.S. producers to open their taps once again.

Futures settled at their highest since March 6 on Tuesday, the day the Saudi-Russian alliance broke down just as a global pandemic dimmed the outlook for demand. Oil's rebound over the past month brings back concerns that Russia could again hesitate to extend output cuts, with rival shale producers signaling they are ready to re-open wells that were shut during the market's collapse.

Further evidence of that threat emerged this week, when U.S. driller Parsley Energy Inc. said it's turning oil wells back on just weeks after shutting them off, illustrating the shale industry's agility in responding to rising crude prices.

"If everybody magically decides to turn the taps back on and lets the oil back to the surface, now you've got 1.5 million to 2 million barrels a day that needs to find a home," said Stewart Glickman, an energy analyst at CFRA Research.

On Tuesday, OPEC members were still wrangling over when to hold their next meeting, against what's still an uncertain demand backdrop. For now, Russia and several other OPEC+ nations are said to favor extending their current output cuts by a month.

It's unclear if a month's extension of curbs is enough for Saudi Arabia -- the biggest producer in the Organization of Petroleum Exporting Countries -- though the proposal is within the range of the kingdom's own call for a one- to three-month elongation.

"It will be a question of how much price gains do you really want with the risk of the return of U.S. shale oil?" said Olivier Jakob, managing director of Petromatrix GmbH.

The industry-funded American Petroleum Institute reported that supplies in Cushing, Oklahoma, fell by 2.2 million barrels last week. That would mark the fourth straight weekly decline if U.S. government data confirms the draw on Wednesday. U.S. crude stockpiles fell 483,000 barrels, according to the report.

North American oil production shut-ins peaked in May, and June curtailments should be "a fraction of the previously announced levels," Bank of America analysts wrote in a Monday note.