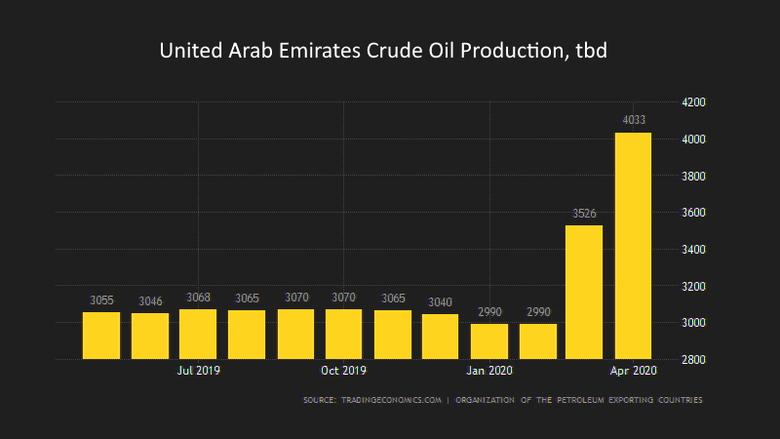 PLATTS - 31 May 2020 - The UAE, OPEC's third-largest oil producer, pumped 2.4 million b/d in May, in line with its 2.446 million b/d OPEC+ quota as members within the 23-member alliance began a historic output curb, a source familiar with the matter told S&P Global Platts on Sunday.

The UAE, which pumped a record 4.1 million b/d in April, has also pledged to trim an extra 100,000 b/d in June, on top of its OPEC+ commitments, as it joins Saudi Arabia's 1 million b/d additional curb and Kuwait's 80,000 b/d cut in attempts to help rebalance global oil markets.

The UAE turned up the taps in April after the breakdown of OPEC+ talks in early March, prompting the start of a price war between Saudi Arabia and Russia that flooded the market with crude. The oil deluge, which caused a price crash, led the OPEC+ coalition to an historic agreement to cut output starting in May and June with a 9.7 million b/d cut, with gradual easing of curbs through to April 2022.

OPEC+ ministers are considering moving up their meeting to June 4 instead of the previously scheduled June 9-10 so that July nominations can factor in any changes to oil production quotas, people familiar with the discussions told Platts on Saturday.

Holding the meeting that early would preclude any May production data from OPEC's six secondary sources, including Platts, from factoring into a decision. But nominations for term volumes by Saudi Arabia and other key OPEC members are typically announced by the first week of the preceding month.