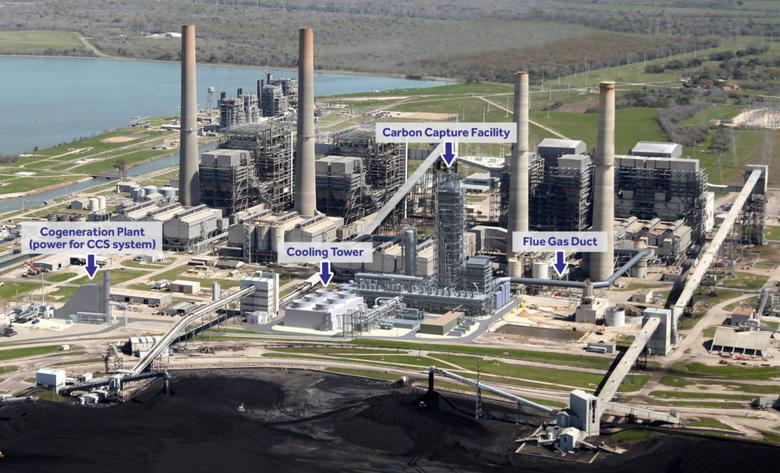 ENERGYCENTRAL - Supported by advances in new technology and federal support through grants and tax incentives, the nascent carbon capture sequestration (CCS) industry might well be in a stronger position today than ever before.  The high cost and complication of carbon capture technology have created several obstacles for success over the years.  According to the U.S. Department of Energy’s (DOE) advanced fossil energy research program, over the period from 2010-2017, only 3 of 9 projects funded remain active now.  There have been several announced projects that never got off the ground.  The most high-profile in recent years has been Southern Company’s mammoth Kemper County Energy Center (aka Plant Ratcliffe) integrated coal gasification (ICG), and CCS project (582 MW) in Mississippi.  With mounting costs, the company decided to scrap the development of the ‘clean coal’ technology project and convert the power plant to burn only natural gas.

The importance of achieving success with CCS technology is paramount to slowing the rate of carbon emissions globally.  Consider that roughly 1,140 gigawatts (GW) of coal-fueled capacity has come online in the past 20 years, with nearly all (95%) built in China, India, and Southeast Asia.  The retrofit of CCS technology is key to keeping these relatively new power plants running in the future.  But today, according to data compiled by the Global CCS Institute, there are only 19 large-scale facilities in commercial operation around the world, with 4 currently under construction and 28 in various stages of development.  Of all the projects in operation, 17 are in the industrial sector, and only 2 in the power sector, the Petra Nova project (240 MW) in the United States, and SaskPower’s Boundary Dam project (115 MW) in Canada.   Of the 51 projects tracked, nearly half (24) are in the Americas.

The driver in America

The recently elevated interest in carbon capture across the United States is driven by the bipartisan Budget Act of 2018, in which Congress expanded and reformed the 45Q tax credit covering carbon capture projects.  Some of the key elements of the legislation including recent IRS guidance include:

The high cost is the primary hurdle dampening CCS development, but with a 45Q tax credit as high as $35 and $50/ton granted for CO2 removal, CCS has gained new interest.  To put the tax credit into perspective, assume a project can remove permanently or through EOR technology 1 million tons of CO2 per year, over a ten-year period that translates into $500 million at $50/ton or $350 million at $35/ton – that is a significant and attractive tax credit.

The Prairie State Energy Campus is one of America’s most efficient, largest, newest, and cleanest coal-burning power plants.  The large facility (1,766 MW) near the community of Marissa, Illinois, is comprised of two units that came online 8 years ago in 2012.  The plant is operated by the Prairie State Generating Company, LLC, and is owned by a group of eight public utilities that serve nine midwestern states and Peabody Energy, owner of the nearby mine that supplies coal via conveyor belt to the plant.

Late last year it was announced that three of the largest players in the carbon capture sequestration (CCS) market space would, under a federal grant (roughly $17.5 million), perform a Front-End Engineering Design (FEED) study to retrofit Prairie State with post-combustion carbon capture technology.

The three companies include Mitsubishi Heavy Industries (MHI) America, Kiewit Corporation, and Sargent & Lundy, all companies involved in the development and construction of the largest operating CCS project in the country, the Petra Nova facility in Thompsons, Texas, northwest of Houston.   The three companies are working on the Prairie State FEED study with The Prairie Research Center at the University of Illinois at Urbana-Champaign.  The work involves the retrofit of one of the two Prairie State units (816 MWe).  The study effort will be conducted from October of last year (2019) through October 2021. The engineering design goal is to achieve 95% CO2 removal.  The project represents the largest post-combustion carbon capture development project in the world with a goal to break ground at the study’s completion. 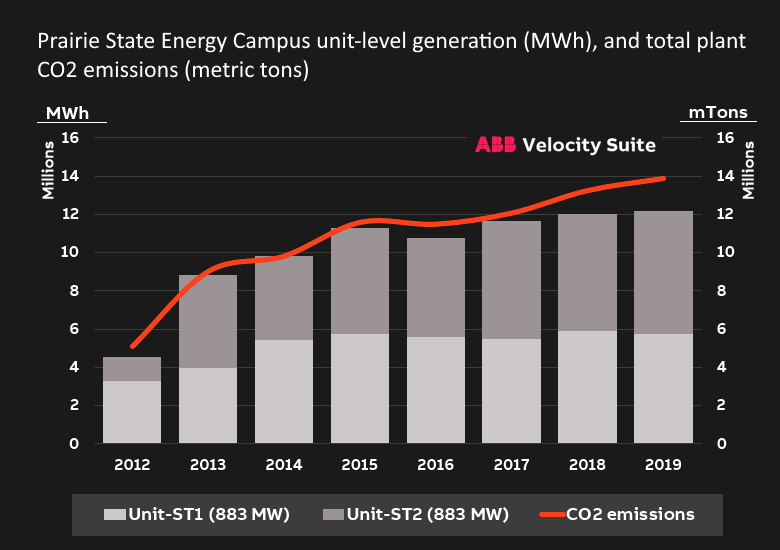 During the two-year period of 2018 and 2019, the Prairie State generating plant produced about 12.1 million MWh of electricity while emitting roughly 13.5 million tons of CO2 per year.  Incorporating sophisticated CCS technology like that developed by MHI’s Advanced KM CDR Process could be extremely beneficial and go a long way toward extending the life of valuable baseload generating assets like Prairie State.

When completed in 2017, Petra Nova became the largest installed CCS facility in the world at a large-scale electricity generating power plant.  The project was started in 2009 when NRG Energy, owner, and operator of the huge W A Parish fossil power plant (3,652 MW), chose Sargent & Lundy to conduct the initial FEED studies and ultimately was awarded the engineering contract to develop the project, a joint venture of Carbon 360 (a subsidiary of NRG) and Japanese conglomerate JX Nippon Oil Exploration, Ltd.  Construction was contracted to a consortium of MHI and The Industrial Company (TIC) with the facility starting operations in 2016 on schedule and on budget.  Petra Nova was named “Project of the Year (with JX Nippon)” and “Coal-Fired Project of the Year” by Power Engineering Magazine in 2017. The project removes roughly 90% of all CO2 emitted from the unit.

From data compiled by the ABB Velocity Suite research team, Unit 8 (Petra Nova retrofit) at W A Parish produced 3.6 million MWh of electricity in 2016, with 4.0 million tons of CO2, an emission rate of approximately 1.13 tons/MWh.  Last year (2019) the plant generated nearly 4.0 million MWh, with CO2 emissions of about 2.3 million tons, a rate of 0.58 tons/MWh – nearly 43% less than in 2016.  The carbon captured at the Petra Nova facility is compressed and transported through an 82-mile pipeline where it is used for enhanced oil recovery (EOR) in the western Texas oil fields.

Petra Nova has averaged around 1.3 million tons of CO2 removal in recent years with a 90% carbon emission capability.  The Prairie State project, when complete, could remove as much as 95% of carbon emissions from half of their plant – which calculates to about 6.5 million tons per year.  That translates into billions of dollars in potential tax credits over a decade of operation.

Other projects getting attention

On May 20, 2020, Flour Corporation announced they had been chosen to lead the FEED effort for Minnkota Power Cooperative’s ‘Project Tundra’.  Back in April, the DOE awarded $17 million to North Dakota’s Energy and Environmental Research Center (EERC) to fund the study.  With the EERC award and other grants, the project has secured about $43 million.  The CCS project involves retrofitting the Milton R Young Station in Center, North Dakota with Fluor’s Econamine FG Plus(SM) carbon capture technology that involves the removal of carbon from flue gas streams.

The Milton R Young CCS project comes with an estimated $1.3 billion price tag.  When construction is complete, and the project is operating, the project (455 MW) would become the largest CCS operating project in the world with a carbon emissions removal goal of 90%.  When fully operational the project could create roughly $3 billion in tax credits over 20 years.  Minnkota serves 11 distribution cooperatives with 135,000 customers in eastern North Dakota and northwestern Minnesota.  The company’s plan to study CCS comes at the same time another regional cooperative, Grand River Energy, announced they intend to retire the largest power plant in North Dakota, Coal Creek Station (1,210 MW), by the end of 2022.  The concern for Minnkota centers on the need for baseload power in the harsh climate of the northcentral United States, where winters can be brutal and renewables like wind and solar are dependent on sunshine and windy days.

Along with Prairie State and the Minnkota project, earlier this year, the city of Farmington, New Mexico, with partner Enchant Energy, announced they would also study the feasibility of retrofitting the massive, slated for shutdown San Juan Generating Station (1,684 MW) with CCS technology.  If the partners can find financial support, the estimated $1 billion project would start construction as early as the end of 2023.  The retrofit would enable 90% carbon removal rates and allow the coal plant to operate through 2035, otherwise, closure is expected by the end of 2022.

On a smaller scale, Occidental Petroleum, the largest oil producer in the Permian Basin of Texas and New Mexico, has announced, with Canadian partner Carbon Engineering, plans to implement carbon capture technology at two ethanol facilities in Texas.

Topping the global mega carbon capture development projects is the United Kingdom’s hydrogen and CCS plans for the refineries and a large fossil-fuel power plant in the Humber region.  The consortium of partners, including Phillips 66, Uniper and Vitol’s VPI Immingham (1,240 MW) power plant, recently signed a memorandum of understanding (MoU) to co-develop ‘Humber Zero’, a large-scale carbon capture and hydrogen production project with the capability to initially decarbonize up to 8 million tons of CO2 emissions per year, with the potential to target up to 30 million tonnes.  The project, which involves post-combustion carbon capture on two of the three operating generating units at the VPI Immingham plant and selected processing units at the Humber and Lindsay refineries, will combine to create both green (renewables) and blue (natural gas) hydrogen fuels to drive the third generator at the plant.  The primary goal is to keep one of the UK’s largest and most efficient baseload power generating facilities running while staying on target with ambitious government ‘zero-carbon’ goals.

In the United States, carbon capture projects will likely only be economically viable with the lucrative 45Q tax credit, so time is of the essence.  Construction must start before the end of 2023, with at least 5% of project investment, and be completed within a six-year window.  Around the world there are about 630 GW of operating coal capacity that is less than a decade old.  With that backdrop, continued investment in new innovative CCS technology could keep the relatively new coal-fueled power plants contributing to the grid as the industry continues moving toward a cleaner power future.