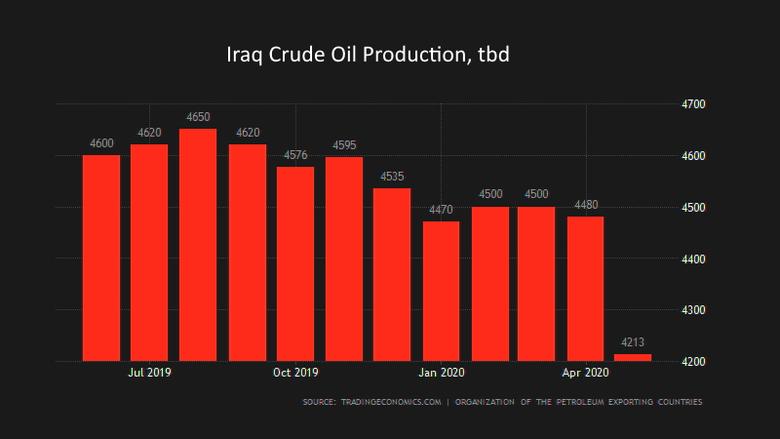 Exports fell to an average of 2.816 million b/d, in line with projections made in June by Oil Minister Ihsan Ismaael. In May, Iraq's exports averaged 3.212 million b/d. The ministry didn't publish production figures.

It pumped 4.068 million b/d of crude oil in May, including production from the Kurdish region in Iraq's north, and exported 3.63 million b/d, according to oil marketer SOMO.

Iraq, whose history of quota flouting has long been a sore spot among the coalition, pumped 4.19 million b/d in May, nearly 600,000 b/d above its cap, making it the worst offender by far, according to the latest S&P Global Platts OPEC+ production survey.

OPEC and its allies, including Russia, are rolling over their 9.6 million b/d in collective production cuts through July, to help bolster the market as it emerges from the depths of the COVID-19 pandemic.

Under the deal, Angola, Iraq, Kazakhstan and Nigeria committed to compensate for their lack of compliance in May and June with extra cuts for quotas in July, August and September.

Iraq had pledged to implement a cut of 57,000 b/d below its quota for June and 258,000 b/d below for July and August, OPEC+ officials told Platts in June.