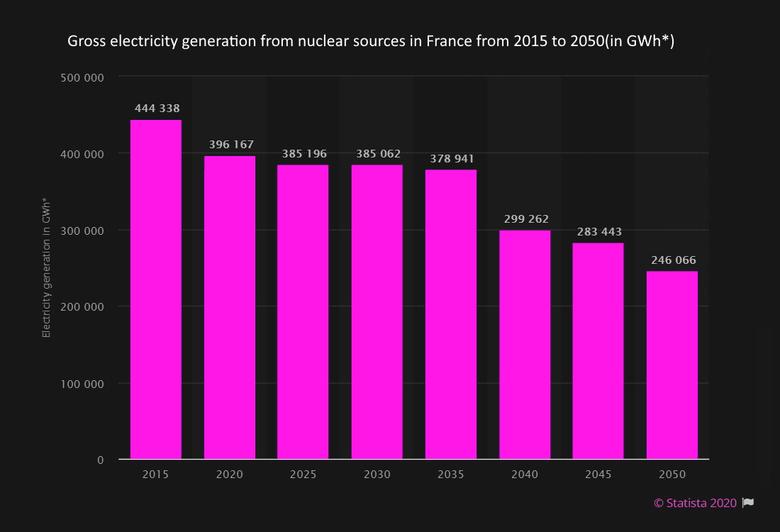 WNN - 01 July 2020 - A failure to renew France's fleet of nuclear power reactors will have consequences as soon as 2030 for not only the country's energy security but also its climate targets, according to the French nuclear energy society (SFEN). Nuclear power plants, with a combined capacity of 62 GWe, currently account for more than 70% of the country's electricity generation.

In a technical note published on 16 June, SFEN said France's energy security by 2050 is at risk if the country's electricity system relies only on the large-scale deployment of renewable energies as well as on technologies still under development, whose industrial maturity cannot yet be guaranteed.

The French electrical system will be faced with three "exceptional challenges" in the next 30 years, SFEN said. Firstly, the country will have to replace most of its existing power reactors as they will reach 60 years of operation in the first half of the 2040s. It says this could risk a "cliff-edge effect". Secondly, France must meet the target of being carbon neutral by 2050. Thirdly, under its energy transition law, the country must reduce its reliance on nuclear energy, which is key for the grid stability, in favour of intermittent renewables.

France also faces other major uncertainties that could affect its energy supply and demand, SFEN said. The country's security of supply could, for example, be influenced by the energy strategies of neighbouring countries and on interconnections. France's National Low Carbon Strategy forecasts a 30% increase in electricity consumption by 2050, largely linked to electrification of transport and housing. SFEN said there are also technological and industrial uncertainties about the pace of deployment and the potential of renewable energies in France, as well as about energy storage, developing flexible demand and the development of electricity interconnection capacities.

Two of the scenarios examined by Compass Lexecon were based on the Multiannual Energy Programme (PPE), published by the French government in November 2018. This is not a piece of legislation, but presents the trajectory to be followed over the next decade in terms of energy policy. It has two main objectives: to reduce the country's fossil fuel consumption and to ensure a clear, fair and sustainable transition. The PPE calls for 14.9 GWe of nuclear generating capacity to be closed by 2035 and for the closure of all power reactors after 60 years of operation. Another scenario examines the potential replacement of up to 21.5 GWe of nuclear capacity by 2050. A fourth scenario considers no nuclear generating capacity after 2050. Two further scenarios looked at flexibility in the power system, including the use of batteries, use of excess generation capacity to produce hydrogen and methane, interconnectors and demand response.

SFEN said the scenarios modelled by Compass Lexecon indicate that, even by targeting a reduced rate of 30% nuclear in the energy mix by 2050, the country would "likely face increasing tensions, multiplied if this rate was lower". It says that in any of the scenarios, wind and solar "will be pushed to their limits" with major acceptance constraints and that "the management of flexibility needs would be based on a major bet regarding the role of technically and industrially immature technologies".

"Beyond the technical risks, there is the central question of the economic framework (regulation and market players) so that the desired trajectory is realised and the objectives are reached," SFEN noted. "The scenarios show high volatility in wholesale prices, partly linked to the phenomenon known as 'cannibalisation' of intermittent energies and amplified by the model storage means. The modelling work thus highlights the need to build a new framework adapted to all low-carbon technology. It especially points out the need to keep the stabilising role of nuclear power for the overall economic balance of the electrical system."

Failure to renew the nuclear fleet would have consequences as soon as 2030, SFEN said. "Losing the nuclear option, by deciding not to launch the renewal of the fleet, or by not making a decision, can have important and visible consequences from the mid-2030s, both for our strategies for electricity supply and the achievement of our climate goals ... France must guarantee this nuclear option today by launching a programme that will consolidate its capacity to build power plants and generate the series effects necessary to gain competitiveness."

SFEN recommends that France includes the project to construct a series of three pairs of reactors in its post-COVID recovery plan and confirms the launch of the project at the end of the investigation in mid-2021. It also says the European Union should include new nuclear in the Green Deal and associated plans for financial mechanisms.