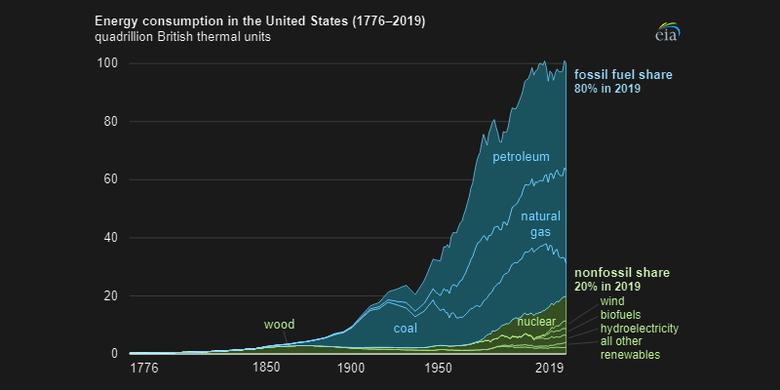 Increases in nuclear and renewables consumption in 2019 resulted in the nonfossil share rising to 20% of total U.S. energy consumption. As coal, petroleum, and natural gas were developed, the nonfossil share fell from 100% in the mid-1800s to 6% in the 1960s and has since slowly increased as consumption of nuclear, hydroelectricity, wind, biofuels, and solar have grown. U.S. fossil fuel consumption peaked at 86 quadrillion Btu in 2007 and has since fallen to 80 quadrillion Btu in 2019, a 7% decline.

Petroleum has been the most-consumed energy source in the United States since surpassing coal in 1950. U.S. petroleum consumption remains lower than its peak in 2005 and most recently totaled 36.7 quadrillion Btu in 2019.

U.S. renewable energy consumption in 2019 reached 11.5 quadrillion Btu, surpassing U.S. coal consumption for the first time in 130 years. The largest growth in renewables during the past decade has been solar and wind electricity generation.

The Monthly Energy Review's pre-1949 estimates of U.S. energy use are based on two sources: Sam Schurr and Bruce Netschert’s Energy in the American Economy, 1850–1975: Its History and Prospects and the U.S. Department of Agriculture’s Circular No. 641, Fuel Wood Used in the United States 1630–1930, published in 1942.