REUTERS - SEPTEMBER 1, 2020 -  Oil prices rose on Tuesday, reversing overnight losses against the backdrop of an equities bull run and a sliding U.S. dollar.

The dollar was at it lowest in more than two years against a basket of currencies .DXY, pressured by the U.S. Federal Reserve's loosening of inflation policy last week, making dollar-priced commodities cheaper for global buyers.

Bulls also pushed up equities, with the MSCI world equity index .MIWD00000PUS close to a record peak on Tuesday.

Yet oil, which often moves in tandem with equities, remains reigned in by demand concerns.

In a Reuters poll of 43 analysts and economists, global oil demand was seen contracting by between 8-10 million barrels per day versus July's 7.2-8.5 million bpd consensus.

Ahead of the release of U.S. stockpile data from the American Petroleum Institute, due at 2030 GMT, a Reuters poll found that analysts expect U.S. crude stocks to have fallen by about 2 million barrels in the week to Aug. 28.

Gasoline inventories were expected to have fallen by 3.6 million barrels. 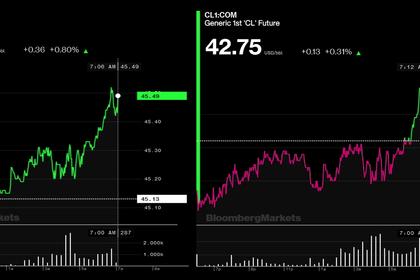