The October Short-Term Energy Outlook (STEO) remains subject to heightened levels of uncertainty related to the ongoing recovery from the COVID-19 pandemic. U.S. economic activity continues to rise after reaching multiyear lows in the second quarter of 2020 (2Q20). U.S. gross domestic product (GDP) declined by 3.4% in 2020 from 2019 levels. This STEO assumes U.S. GDP will grow by 5.7% in 2021 and by 4.5% in 2022. The U.S. macroeconomic assumptions in this outlook are based on forecasts by IHS Markit. Our forecast assumes continuing economic growth and increasing mobility. Any developments that would cause deviations from these assumptions would likely cause energy consumption and prices to deviate from our forecast.

Brent crude oil spot prices averaged $74 per barrel (b) in September, up $4/b from August and up $34/b from September 2020. Brent spot prices have risen from their September average to more than $80/b in early October. Oil prices have increased over the past year as result of steady draws on global oil inventories, which averaged 1.9 million barrels per day (b/d) during the first three quarters of 2021. In addition to sustained inventory draws, prices increased after the October 4 announcement by OPEC+ that the group would keep current production targets unchanged.

We expect Brent prices will remain near current levels for the remainder of 2021, averaging $81/b during the fourth quarter of 2021, which is $10/b higher than our previous forecast. The higher forecast reflects our expectation that global oil inventories will fall at a faster rate than we had previously expected owing largely to lower global oil supply in late 2021 across a range of producers. In 2022, we expect that growth in production from OPEC+, U.S. tight oil, and other non-OPEC countries will outpace slowing growth in global oil consumption and contribute to Brent prices declining from current levels to an annual average of $72/b.

In September, the natural gas spot price at Henry Hub averaged $5.16 per million British thermal units (MMBtu), which was up from the August average of $4.07/MMBtu and up from an average of $3.25/MMBtu in the first half of 2021. The rising prices in recent months reflect U.S. natural gas inventory levels that are below the five-year average and continuing demand for natural gas for power generation use at relatively high prices.

We expect the Henry Hub spot price will average $5.80/MMBtu in fourth-quarter 2021, which is $1.80/MMBtu higher than we forecast in the September STEO. In the current forecast, Henry Hub prices reach a monthly average peak of $5.90/MMBtu in January and generally decline through 2022, averaging $4.01/MMBtu for the year amid rising U.S. natural gas production and slowing growth in LNG exports. We raised our Henry Hub price forecast through the end of 2022 compared with last month. The increase reflects a higher starting point for our price forecast that incorporates recent developments in U.S. and global natural gas markets. We forecast that U.S. inventory draws will be slightly more than the five-year average this winter, and we expect that factor, along with rising U.S. natural gas exports and relatively flat production through January will keep U.S. natural gas prices near recent levels before downward pressures emerge. Given low natural gas inventories in both U.S. and European natural gas storage facilities and uncertainty around seasonal demand, we expect natural gas prices to remain volatile over the coming months, with winter temperatures being a key driver of demand and prices.

We estimate that U.S. LNG exports averaged 9.3 billion cubic feet per day (Bcf/d) in September 2021, down 4% from August. Despite the recent monthly decline, these were the most U.S. LNG exports for September since the United States began exporting LNG from the Lower 48 states in February 2016. Even though September exports were a record for the month, they were limited by weather conditions, which led to the suspension of piloting services for several days at Sabine Pass, Cameron, and Corpus Christi. We expect that LNG exports will average 9.1 Bcf/d in October and then increase in the coming months. Cove Point LNG terminal is scheduled to complete its annual maintenance by mid-October and resume exports this month. Through this winter, LNG exports in the forecast average 10.7 Bcf/d as global natural gas demand remains high and several new LNG export trains—the sixth train at Sabine Pass LNG and the first trains at the new LNG export facility Calcasieu Pass LNG—enter service.

We estimate that U.S. natural gas inventories ended September 2021 at about 3.3 trillion cubic feet (Tcf), 5% less than the five-year (2016–20) average for this time of year. Injections into storage this summer have been below the previous five-year average, largely as a result of more electricity consumption in June due to hot weather, and increased exports even as domestic natural gas production has remained flat. We forecast that inventories will end the 2021 injection season (at the end of October) at almost 3.6 Tcf, which would be 5% less than the previous five-year average. We expect natural gas inventories to fall by 2.1 Tcf this winter, ending March at less than 1.5 Tcf, which would be 12% less than the 2017–21 average for that time of year.

We estimate dry natural gas production averaged 93.3 Bcf/d in the United States during the third quarter of 2021—up from 91.6 Bcf/d in in the first half of 2021. Production in the forecast rises to an average of 94.0 Bcf/d during the winter, and averages 96.4 Bcf/d during 2022, driven by natural gas and crude oil prices, which we expect to remain at levels that will support enough drilling to sustain production growth.

Electricity generation from coal-fired power plants has not increased as much in response to rising natural gas prices as it has in the past, or by as much as our models forecasted in recent STEOs. The lower price responsiveness of coal for electricity generation, which is likely the result of constraints on coal supply and low coal stocks, is contributing to upward pressure on natural gas prices. To reflect the lower price responsiveness of coal-fired electricity generation, we have lowered our forecast for U.S. coal generation for the fourth quarter of 2021 and the first half of 2022 by an average of 7 billion kWh (9%) each month, and we have raised our forecast for natural gas generation 5 billion kWh (5%) each month.

Coal production in our forecast totals 588 million short tons (MMst) in 2021, 53 MMst more than in 2020. We expect demand for coal from the electric power sector to increase by 84 MMst in 2021. Production growth is unlikely to match the increases in demand in the near term due to many coal mines operating at a reduced capacity and limited available transportation. In 2022, we expect coal production to increase by 34 MMst to 622 MMst, as the production and transportation constraints experienced in 2021 ease. Secondary inventories of coal at electric utilities decreased in the first half of 2021, and we forecast this trend will continue into the second half of 2021 and 2022. 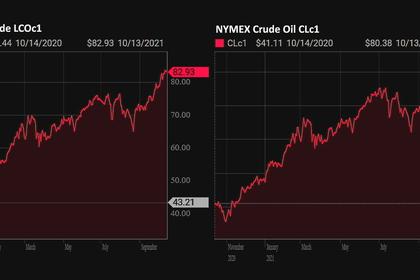 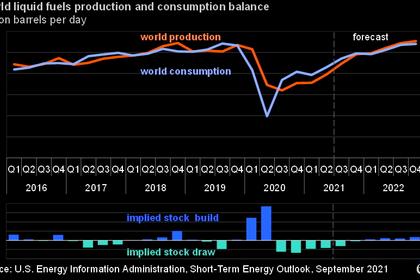 GLOBAL OIL DEMAND WILL UP
"Global oil demand is expected to return to pre-COVID levels towards the tail end of 2022, but the recovery will be uneven. Asia is clearly the driver of growth," IEA Executive Director Fatih Birol said
English 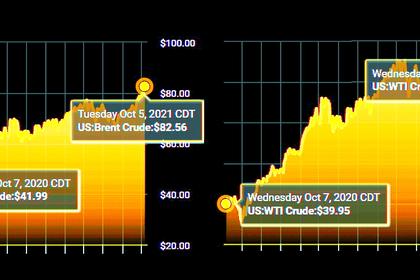 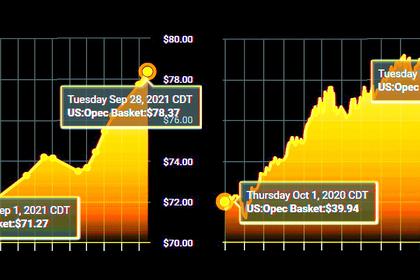 OIL PRICES WILL UP
Dated Brent prices should average somewhere in the upper $70s/b in October and it is quite possible that they may rally during this time,
English 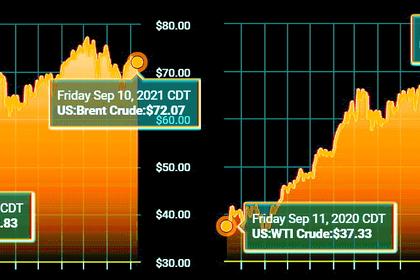