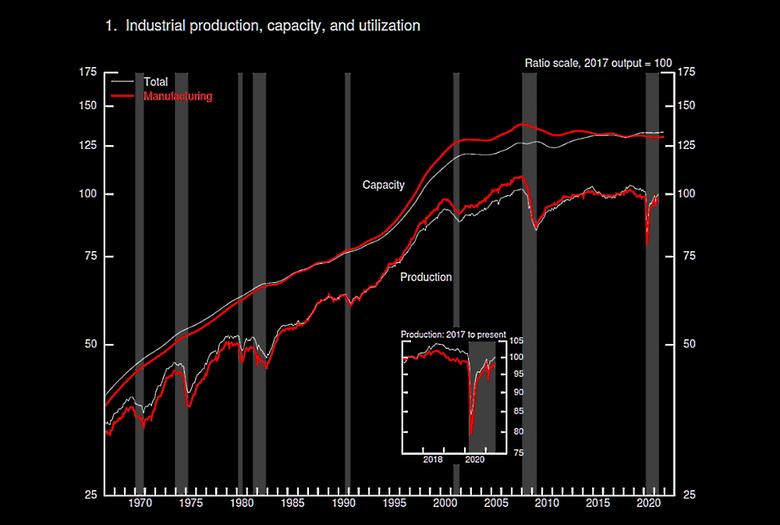 U.S. FRB - July 15, 2021- Industrial production increased 0.4 percent in June after moving up 0.7 percent in May. In June, manufacturing output edged down 0.1 percent, as an ongoing shortage of semiconductors contributed to a decrease of 6.6 percent in the production of motor vehicles and parts. Excluding motor vehicles and parts, factory output increased 0.4 percent. The output of utilities advanced 2.7 percent, reflecting heightened demand for air conditioning, as much of the country experienced a heat wave in June. The index for mining increased 1.4 percent.

At 100.1 percent of its 2017 average, total industrial production in June was 9.8 percent above its year-earlier level but 1.2 percent below its pre-pandemic (February 2020) level. Capacity utilization for the industrial sector rose 0.3 percentage point in June to 75.4 percent, a rate that is 4.2 percentage points below its long-run (1972–2020) average.

Market groups posted mixed results in June. The drop in motor vehicle output contributed to decreases in consumer goods and business equipment. Defense and space equipment posted the largest gain among market groups, advancing 4.4 percent. The index for materials advanced 1.0 percent as a result of a gain in energy materials.

In June, manufacturing output edged down 0.1 percent and was 0.8 percent below its pre-pandemic level. Production of durable goods slipped 0.2 percent; in addition to the drop for motor vehicles and parts, declines of more than 1.0 percent were recorded by nonmetallic mineral products and by electrical equipment, appliances, and components. The output of nondurable goods rose 0.2 percent. The largest increases were recorded by printing and support activities and by petroleum and coal products, while the largest decreases were recorded by paper and by apparel and leather. The output of other manufacturing (publishing and logging) declined 0.8 percent.

The Federal Reserve Board issued its annual revision to the indexes of industrial production (IP) and the related measures of capacity utilization on May 28, 2021. The base year for the revised indexes is 2017. New annual benchmark data for manufacturing for 2017 through 2019 were incorporated, as well as other annual data, including information on the mining of metallic and nonmetallic minerals (except fuels). The weights for market-group splits of the industry-level indexes were updated with information from the 2012 benchmark input-output accounts from the U.S. Bureau of Economic Analysis. The updated IP indexes included revisions to the monthly production indicator (either product data or input data) and to seasonal factors for each industry. In addition, the estimation methods for some series were changed. Any modifications to the methods for estimating the output of an industry affected the index from 1972 to the present.

Capacity and capacity utilization were revised to incorporate data for manufacturing through the fourth quarter of 2020 from the U.S. Census Bureau's Quarterly Survey of Plant Capacity Utilization, along with new data on capacity from the U.S. Geological Survey, the U.S. Department of Energy, and other organizations.

Note. The statistics in this release cover output, capacity, and capacity utilization in the U.S. industrial sector, which is defined by the Federal Reserve to comprise manufacturing, mining, and electric and gas utilities. Mining is defined as all industries in sector 21 of the North American Industry Classification System (NAICS); electric and gas utilities are those in NAICS sectors 2211 and 2212. Manufacturing comprises NAICS manufacturing industries (sector 31-33) plus the logging industry and the newspaper, periodical, book, and directory publishing industries. Logging and publishing are classified elsewhere in NAICS (under agriculture and information respectively), but historically they were considered to be manufacturing and were included in the industrial sector under the Standard Industrial Classification (SIC) system. In December 2002 the Federal Reserve reclassified all its industrial output data from the SIC system to NAICS. 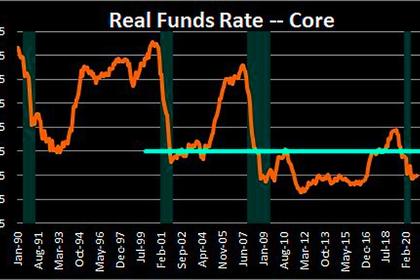 U.S. FEDERAL FUNDS RATE 0.0 - 0.25% ANEW
The Committee decided to keep the target range for the federal funds rate at 0 to 1/4 percent and expects it will be appropriate to maintain this target range until labor market conditions have reached levels consistent with the Committee's assessments of maximum employment and inflation has risen to 2 percent and is on track to moderately exceed 2 percent for some time.
English 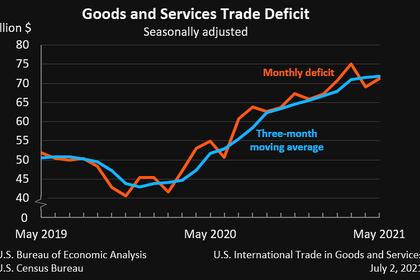 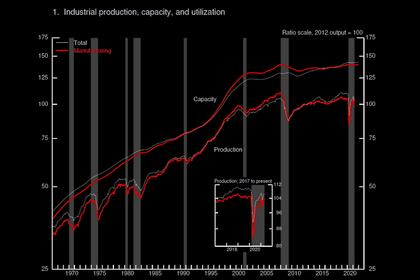 U.S. INDUSTRIAL PRODUCTION UP 0.7%
Total industrial production increased 0.7 percent in April. The indexes for mining and utilities increased 0.7 percent and 2.6 percent, respectively; the index for manufacturing rose 0.4 percent despite a drop in motor vehicle assemblies that principally resulted from shortages of semiconductors.
English

U.S. GDP UP 6.4%
Real gross domestic product (GDP) increased at an annual rate of 6.4 percent in the first quarter of 2021
English