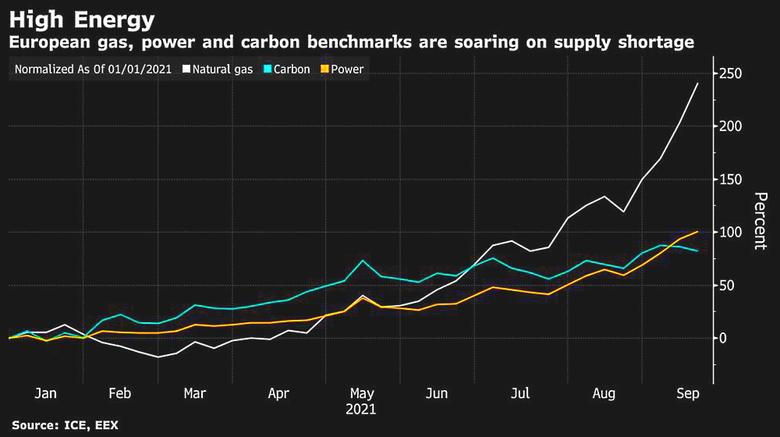 REUTERS - Sept 22  - Energy ministers from European Union countries will on Wednesday discuss the soaring price of gas and electricity across Europe, as some governments draw up measures to protect their consumers.

Benchmark European power prices have rocketed this year, more than trebling in Spain and elsewhere, partly because gas prices have been driven up by factors such as low storage stocks, high EU carbon prices and low renewable energy output.

He said the surge electricity and gas prices was “not okay for our economy, for our citizens.”

Benchmark European gas prices have risen by more than 250% since January.

Some governments, including in Italy and Greece, have said they are considering measures such as subsidies or price caps to shield citizens from rising costs as economies recover from the COVID-19 pandemic.

Spain has urged the EU to organise a more coordinated response, asking the European Commission to provide guidance on now member states can respond to the price spikes without testing EU rules.

EU energy commissioner Kadri Simson said the Commission was monitoring the situation and “discussing what tools are at our disposal” to respond.

The EU ministers will on Wednesday also hold their first debate on proposals to toughen EU climate change policies, including proposals to expand the share of renewables in its energy mix to 40% by 2030.

“I am convinced that our response must be a more speedy transition to renewable energies,” Austrian climate and energy minister Leonore Gewessler said, adding this would make the EU “more resilient to price fluctuations in the long term.” 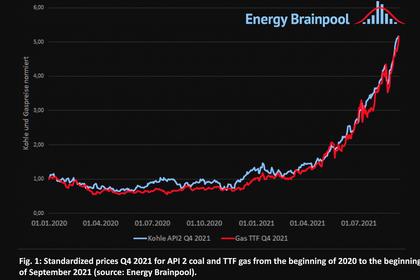 COAL POWER RETURNING
The mentioned effects of low generation from renewable energies and higher consumption led to a significant increase in coal-fired power generation, at least in Germany
English

EUROPEAN CLIMATE ADAPTATION
Adaptation measures include flood prevention measures and renovating buildings to make them more resilient to extreme temperature. The changes required vary across the continent, but recent events have shown that climate change poses a threat to Europe’s cities.
English 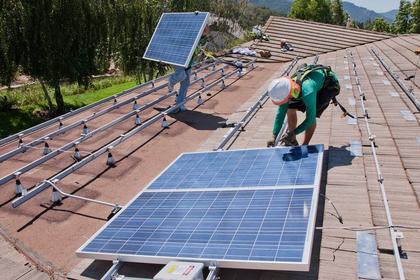 EUROPEAN CLIMATE INVESTMENT €30 BLN
The European Parliament (EP) has approved the €30bn upgraded Connecting Europe Facility (CEF) programme for 2021 to 2027, with 60% for projects that help achieve the EU’s climate objectives and 15% of energy pillar funds for cross-border renewable energy projects.
English
All Publications »
Tags: EUROPE, ENERGY
OIL PRICE: NOT ABOVE $86