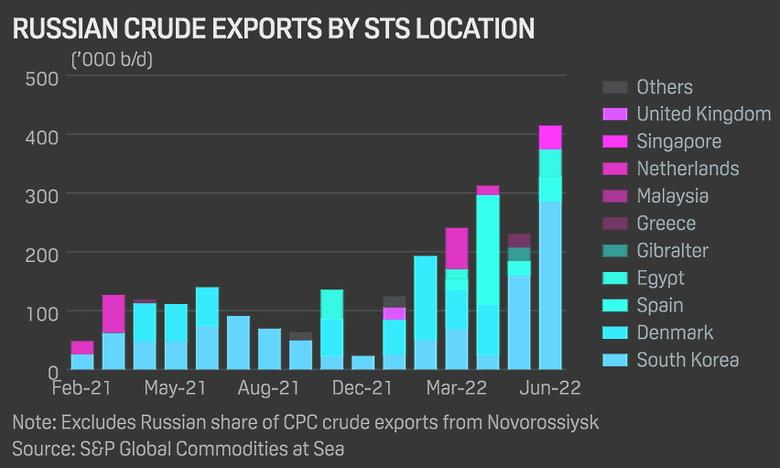 PLATTS - 01 Aug 2022 - Exports of potentially illicit Russian crude have more than trebled since the start of the Ukraine war, according to shipping data, as Moscow increasingly follows the playbook of sanction evaders Iran and Venezuela to sell its oil under the gaze of Western governments.

Tankers carrying Russian-origin crude transferred more than 400,000 b/d to other ships in offshore operations in June, according to S&P Global's Commodities at Sea vessel tracker, after surging from a baseline of around 90,000 b/d before Russia invaded Ukraine on Feb 24.

Most of the boom in STS activity involving Russian crude has taken place in waters off Spain and South Korea with the majority of the transferred cargoes ending up in China and India, the data shows.

Although commonplace and not inherently illicit, STS transfers are frequently used to evade sanctions by concealing the origin or destination of seaborne oil cargoes. The trade often involves oil tankers turning off their satellite transponders, known as 'going dark', before carrying out ship-to-ship transfers to obscure their location and anchor status.

Such was the case with Pegas, the Russian-affiliated tanker carrying Iranian crude that was grounded in Greece in April as part of new EU sanctions against Russia. Now renamed Lana, the tanker had changed its identity in mid-2021 before going dark in the Persian Gulf near Kharg Island, one of Iran's main oil loading points, according to Windward, an Israeli marine risk management firm. After resuming its satellite transmissions the tanker had a much deeper draft status, indicating it likely loaded crude while the vessel was in the area.

The boom in STS activity involving Russian crude came as Moscow's seaborne oil exports defied Western sanctions to hit post-pandemic highs of 4 million b/d in April 2022. Although Russian oil exports are now slipping as the EU's year-end ban on Russian oil draws closer, flows to China and India are now absorbing half of all Russian crude exports, the data shows, compared to a quarter in January. While Western sanctions can do little to stop China and India from snapping up heavily-discounted Russian crude, plenty of Asian shippers and refiners still appear keen to mask the origin of their crude. Almost 40% of China's 1 million b/d of Russian seaborne crude imports in June arrived via STS transfers, the data shows.

A growing part of this Russian crude reaching China is coming from Russia's eastern Kozmino port where its ESPO crude is shipped to waters off Yeosu in South Korea for STS transfers to other tankers. In June alone, some 285,000 b/d of Russian ESPO crude was delivered to China via this route, according to CAS.

It remains unclear, however, how much Russia can rely on gray market shipments to circumvent sanctions going forward, particularly as the EU's import bans combined with restrictions on shipping insurance, financing, and services, threaten to disrupt more supply volumes.

In early June, Sheldon had forecast Russian production shut-ins reaching 2 million b/d by December but now concedes that estimate could be revised lower if its exports remain resilient. 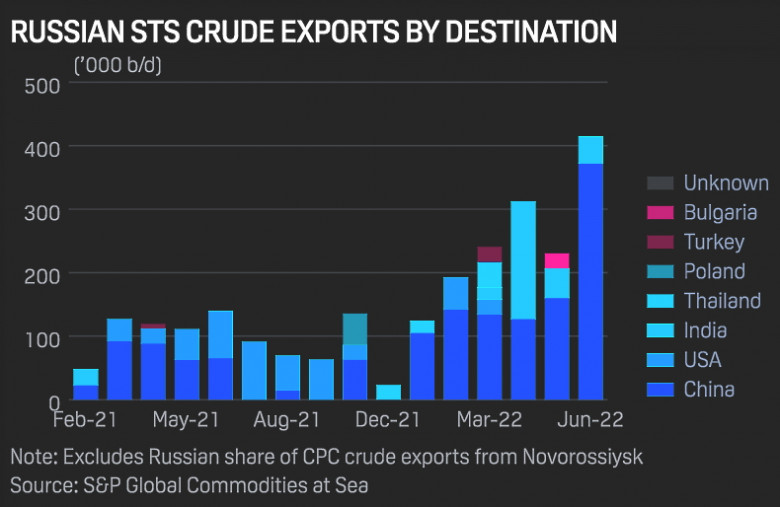 STS crude transfers have been part of the sanctions-dodging playbook for Iran and Venezuela for years. Iran has openly advertised its efforts for evading US sanctions by selling its oil through alternative channels.

In 2019, Tehran said it had found ways to sell its oil as tightening US sanctions sought to cut off more of its revenues.

"We mobilized all the capacities of the country and we sell oil in the gray market," Iran's deputy oil minister Amirhossein Zamaninia said at the time. "It is not called smuggling but a way to counter the sanctions which we do not see as just or legitimate."

After averaging just 117,000 b/d in 2020, volumes of Iranian crude exported via STS transfers surged to average 428,302 b/d in 2021, or about 45% of total exports, the data shows. They have dropped back since March, however, possibly faced with price competition from displaced barrels of Russian Urals crudes.

In 2020, the US accused Iran of delivering some of its unsold oil to North Korea and Syria and provided guidance to the industry to "address illicit shipping and sanctions evasion practices."

It estimated that North Korea could have imported 3.89 million barrels of oil products from STS transactions alone during the first tens months of 2019, or more than seven-and-a-half times the allowable amount of refined UN Security Council allowances.

Indeed, the re-branding of blended crudes from opaque origins -- often via offshore STS operations-- to dodge sanctions has already become a mainstay of crude supplies into Asia.

S&P Global data showed about 589,000 b/d of Iranian crude was actually imported into China's Shandong province in June, marked officially as crude from other origins. Most of the June arrivals are reported to the customs as Malaysian crude, mostly as Mal Blend, KM Blend and Nemina, and the remainder of about 105,000 b/d was reported as being UAE-origin Upper Zakum. Much of the blending happens offshore in Southeast Asian anchorages, such as Malaysian ports of Sungai Linggi or Tanjong Pelepas, well known for ship-to-ship transfers.

Venezuelan and Russian crude exporters have more recently been observed transferring their cargoes in international waters near Spain's North African port enclave Ceuta and Malta, CAS data shows. Russian-linked tanker STS transfers have also been seen rising sharply off Kalamata in southern Greece with as many as three tankers a day swapping oil in both international and Greek territorial waters, according to Lloyd's List Intelligence.

As more European buyers shun Russian oil in the run-up to the year-end cut-off for EU imports, the market for gray oil trading will only likely increase as it seeks to sell displaced barrels.

Russian fuel oil and other oil products are already finding a new home in the UAE's key Fujairah storage hub where they can be blended with other origin products.

In July, Russian fuel oil export departures to Fujairah surpassed 100,000 b/d for the third consecutive month, surging from just 32,300 b/d in the first quarter of the year., CAS data shows.

From an import angle, 186,000 b/d of Russian fuel oil has discharged into Fujairah in July, a 121,000 b/d gain from June and imports into the UAE have doubled from April to May.

Saudi Arabia has also absorbed 45,000 b/d of Russian fuel oil in July, the highest rate since October 2019, freeing up more crude for exports rather than for domestic refining. 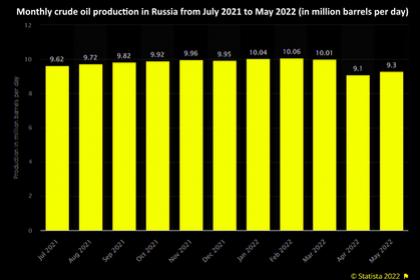 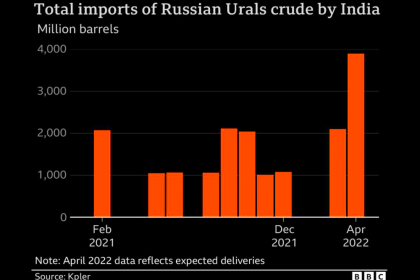 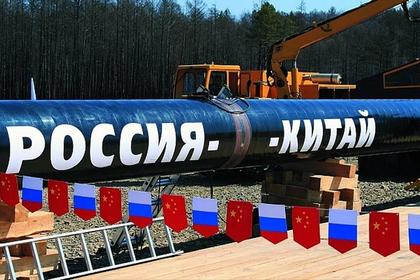 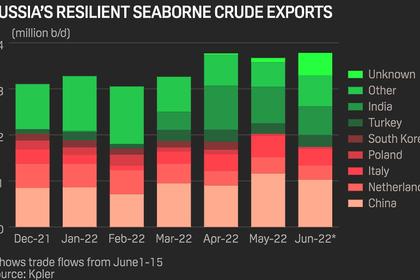 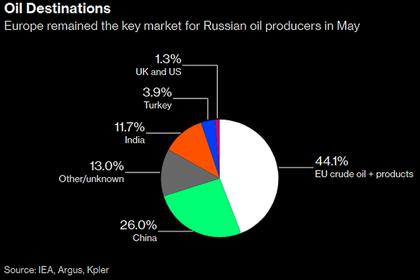 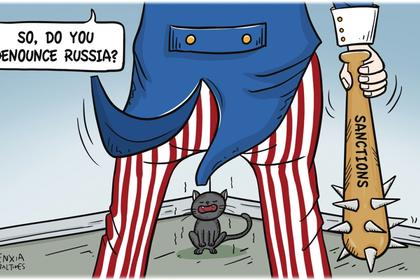 RUSSIA SANCTIONS $285 BLN
Even with some countries halting or phasing out energy purchases, Russia's oil-and-gas revenue will be about $285 billion this year, according to estimates from Bloomberg Economics based on Economy Ministry projections.
English
All Publications »
Tags: RUSSIA, OIL, EXPORTS, IMPORTS
OIL PRICE: BRENT ABOVE $86, WTI ABOVE $78