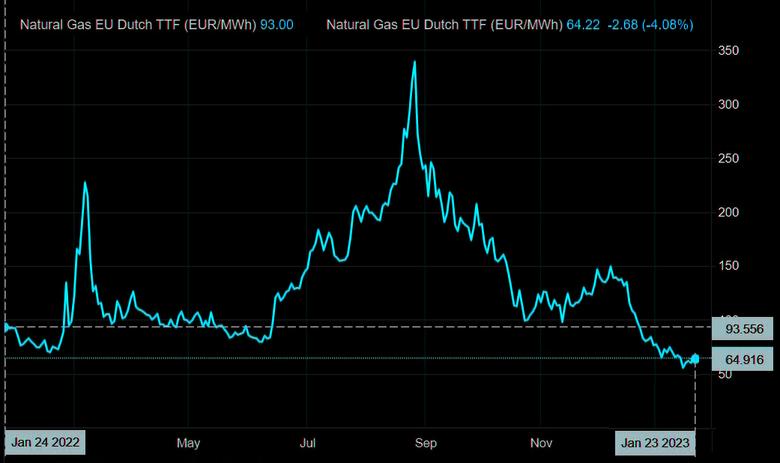 BLOOMBERG - Jan 23, 2023 - European natural gas fluctuated with Norwegian supplies expected to drop to the lowest in more than two months in the middle of a cold snap that’s boosting demand.

Available capacity at several Norwegian facilities has been reduced by works and orders for shipments have fallen. While flows from the country are crucial for meeting demand, Europe’s fuller-than-normal stockpiles are providing a healthy buffer for any disruption. High imports of liquefied natural gas are also helping ease concerns.

Gas consumption could rise further over the next few days as a wave of cold temperatures is expected to persist in northwest Europe for most of this week. Maxar Technologies Inc. forecasts London dropping 4.4C below the seasonal average on Monday and Paris 3.6C colder on Thursday. Conditions are seen warmer next week.

The frigid weather has brought back some demand after a prolonged period of unusual warmth has gas storage sites about 78% full compared with a five-year average of 58%. The reserves have kept Europe on track to ride out this winter without any major disruptions, and pushed gas prices to about half the levels of what they were during the previous cold snap in early December.

Russian pipeline gas transit via Ukraine declined last week and nominations suggest flows will remain curbed on Monday, though some analysts suggest this may be due to lower demand from buyers rather than supply issues.

Dutch front-month futures, were 0.2% lower at €66.80 a megawatt-hour by 8:58 a.m. in Amsterdam, after rising as much as 3.1% earlier. They increased 10% on Friday for the first weekly gain after five straights periods of declines. 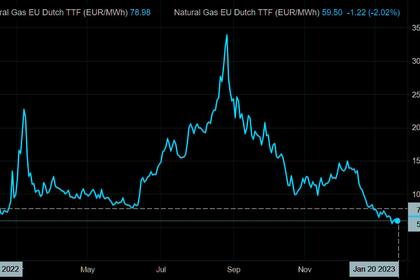 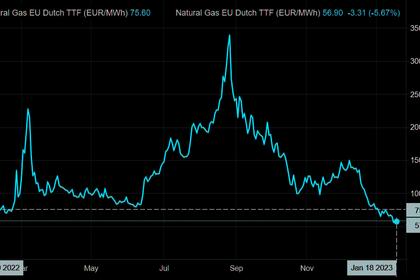 EUROPEAN GAS PRICES REDUCTION
The region’s storage sites are around 81% full, some 20 percentage points above the five-year average. That’s providing confidence that Europe will end the winter with inventories over 50% and “more than enough gas to completely replenish its storage by the start of next winter,”
English 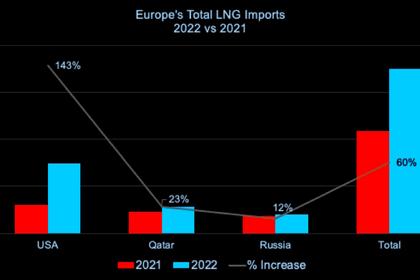 EUROPE NEED MORE LNG
Despite the adoption of the Versailles Declaration in March 2022, when leaders of the 27 EU member states pledged to phase out the EU’s dependence on Russian fossil fuels as soon as possible, imports of Russian LNG increased by 12% in 2022 compared to 2021.
English 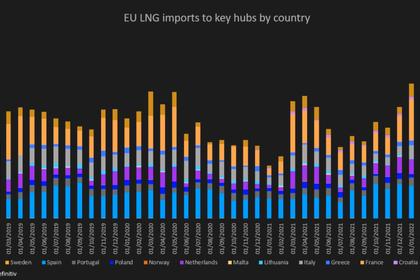 EUROPE NEED U.S. LNG
According to the EU-US announcement, EU commission aims to increase annual demand for American LNG by 50BCM by the end of 2030 and procure 15BCM more in 2022,
English 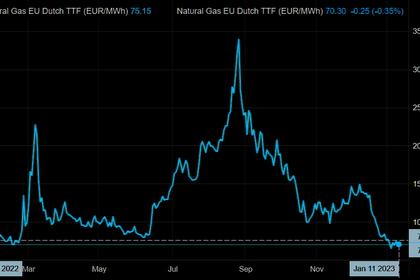 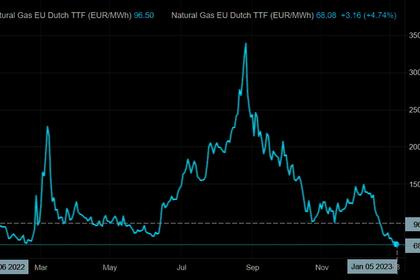 EUROPEAN GAS PRICES UPDOWN YET
Dutch front-month futures, the European gas benchmark traded 2% higher at to €66.30 per megawatt-hour by 12 p.m. in Amsterdam. The UK equivalent contract also rose. German power for next month increased 2.3% to €166 per megawatt-hour.
English 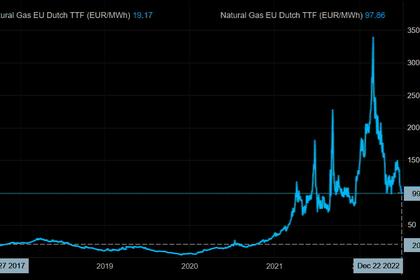 EUROPEAN GAS PRICE CAP
"The TTF month-ahead settlement price for derivatives is by far the most widely used benchmark in gas supply contracts across the EU, followed by maturities of two-month ahead and year ahead," it states.
English
All Publications »
Tags: EUROPE, GAS, PRICE, RUSSIA
OIL PRICE: BRENT NEAR $82, WTI ABOVE $75